Towards the end of my pregnancy I had an ultrasound in which they couldn’t really see Digeo’s feet. They had determined that they were either tucked super tightly together and he was running out of room OR he had slight clubfoot. While it wasn’t super comforting, it was something the the doctor assured us was easily fixable and we felt grateful for that. But we still worried. It was just one more thing that wasn’t quite right and was full of so many unknowns. Sure enough Diego came out with the most adorable crooked little feet. And when I say little I mean huge. His feet were huge haha. Everything about him was huge. But it was absolutely adorable. I loved the way he held his toes together like hands and how his legs would spring up like a little frog. The whole time we were in the hospital different doctors and nurses all had different opinions. Yes it was for sure clubfoot. Oh no, just the left foot was clubfoot. Nope no way, they look normal. We went home without any concrete answers and set an appointment with a child orthopedist. 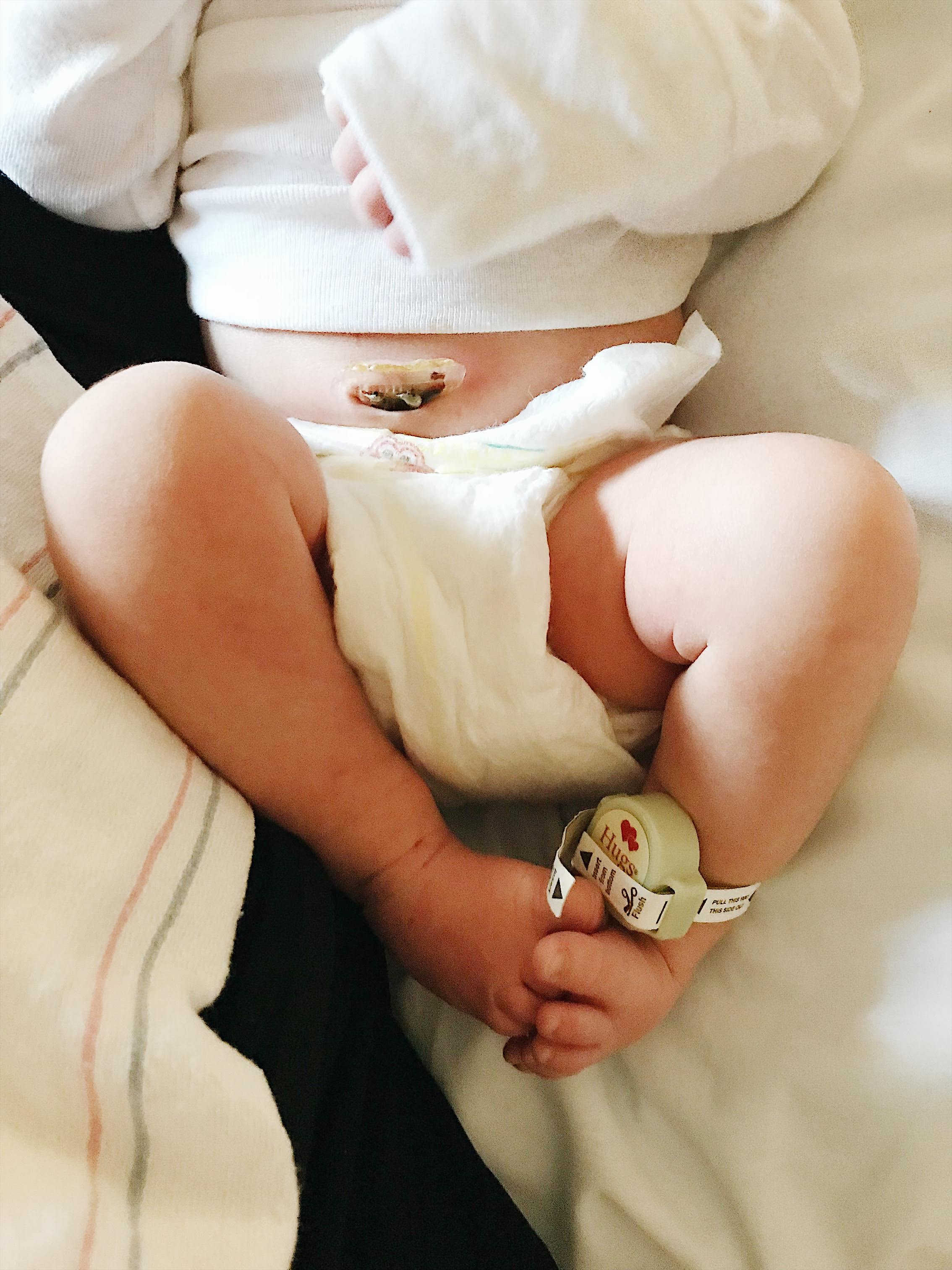 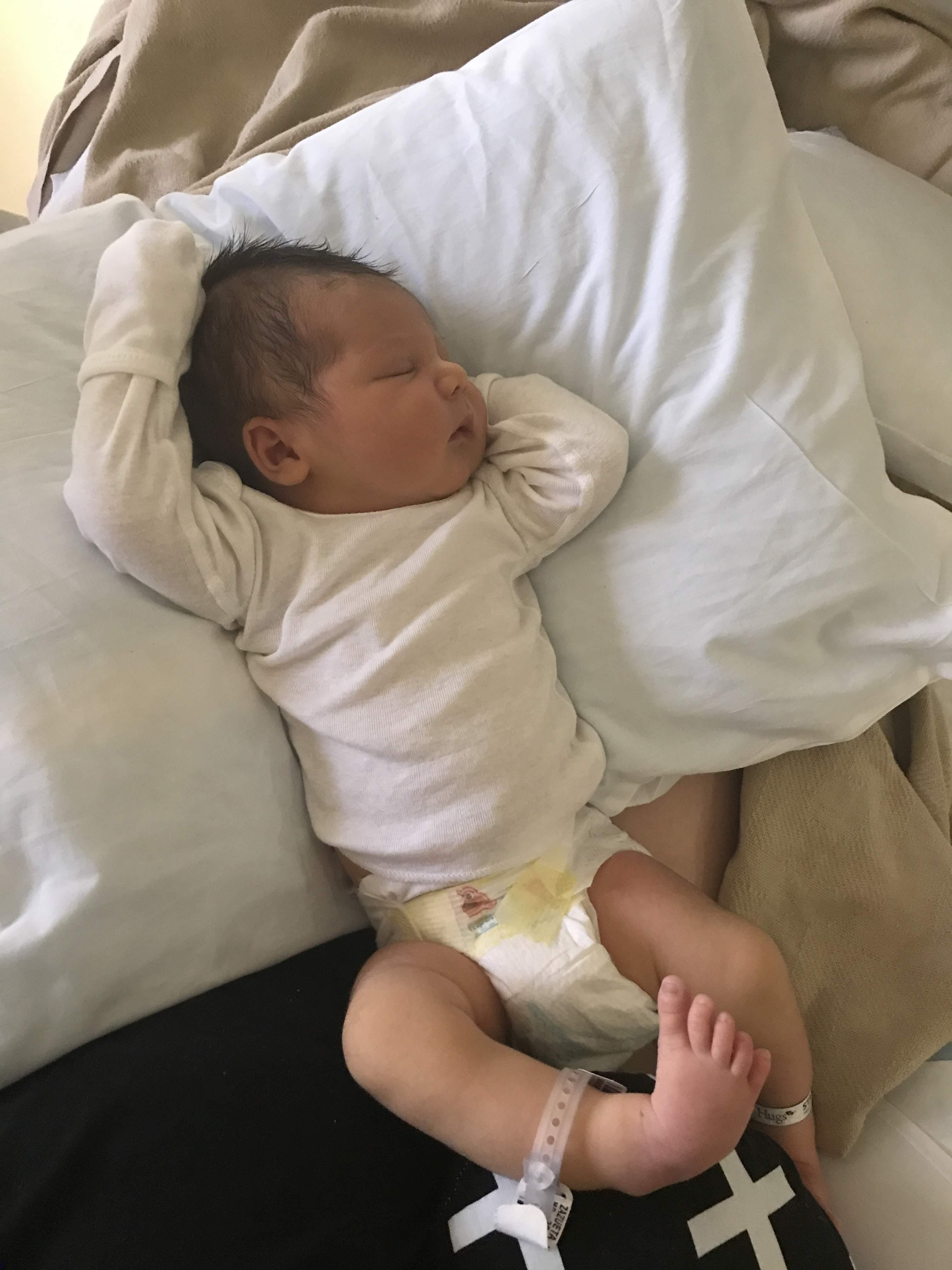 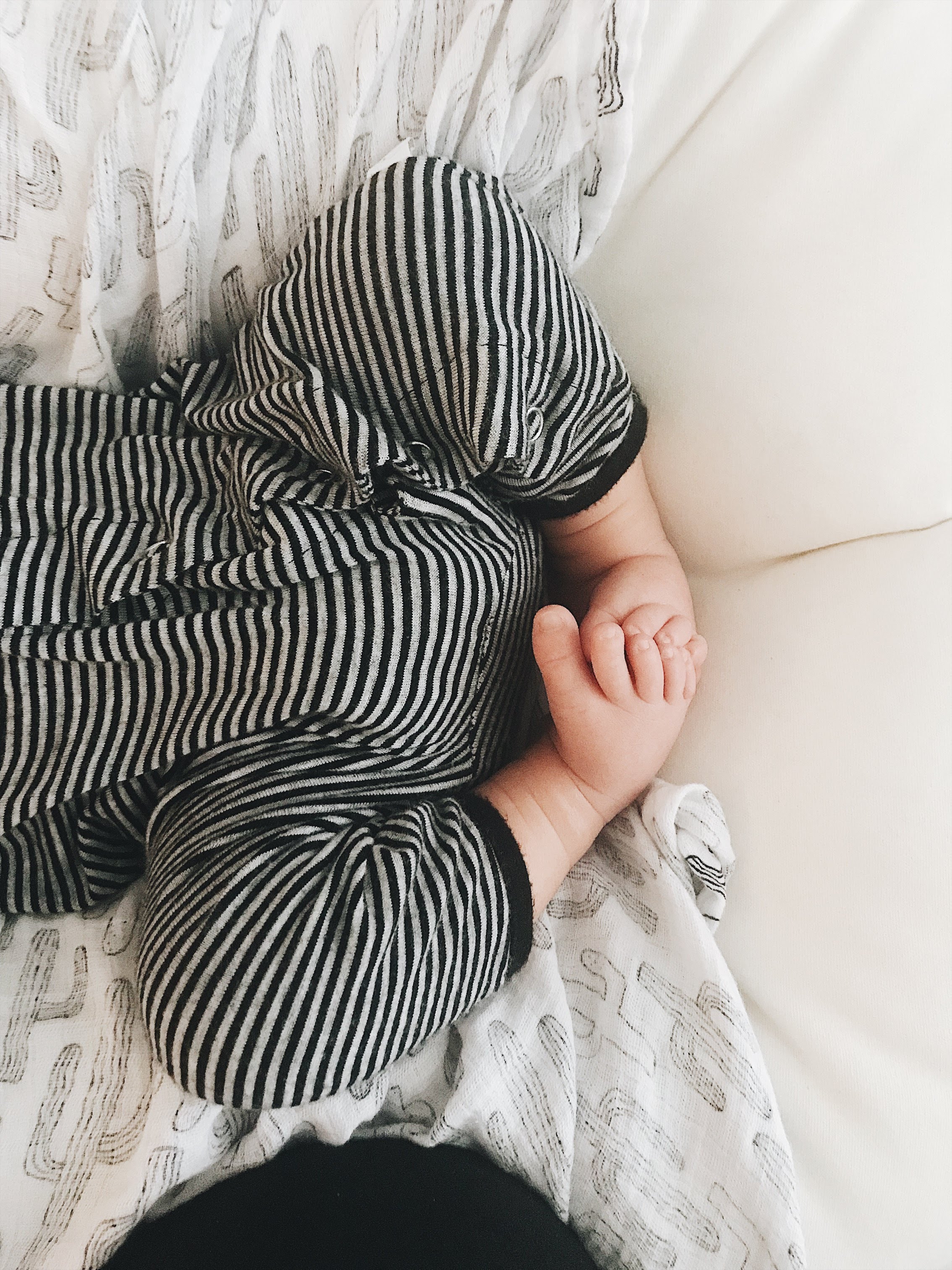 We were referred to a doctor at Phoenix Children’s Hospital. He assessed Diego’s feet and diagnosed him with a mild case of metatarsus adductus. Meaning that just the front part of his feet were turned in as opposed to the whole foot. Most likely caused by his being so squished in the womb. He said he would need casts for 1-3 weeks and that after that it would correct itself over time. It was so nice to have answers when in my mind I had imagined months and months of casts.

A week later we went to Diego’s first casting appointment. They told us not to feed him before so they he could eat while they casted him and he would hold still. They called us back and we took one last look at his feet. Diego was a little angel while they put the casts on and none of us cried. Until we left the hospital haha. They casted him all the way up to his thighs and even though I knew it shouldn’t hurt him, he just looked so sad. Giant casts on a 4 week old baby! 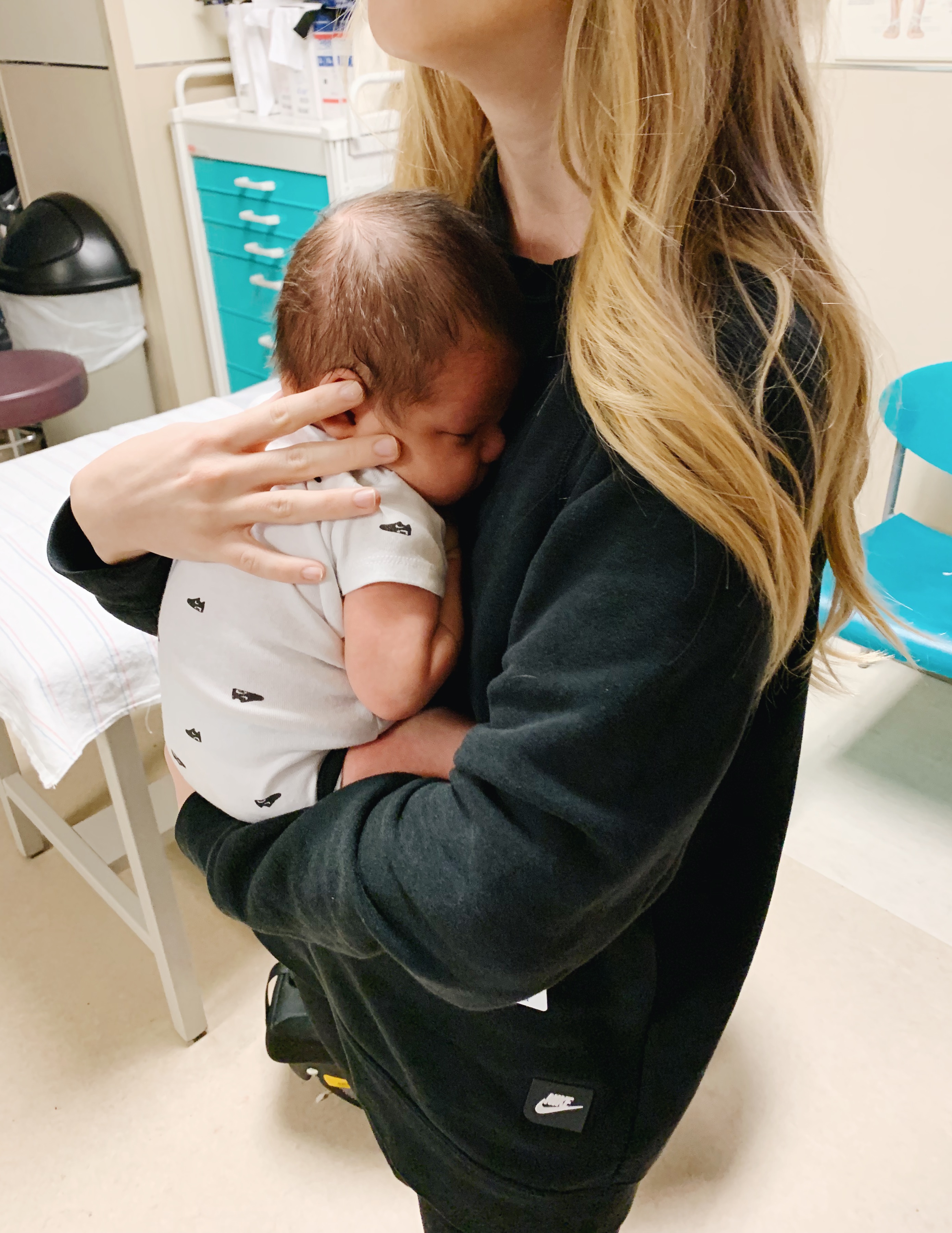 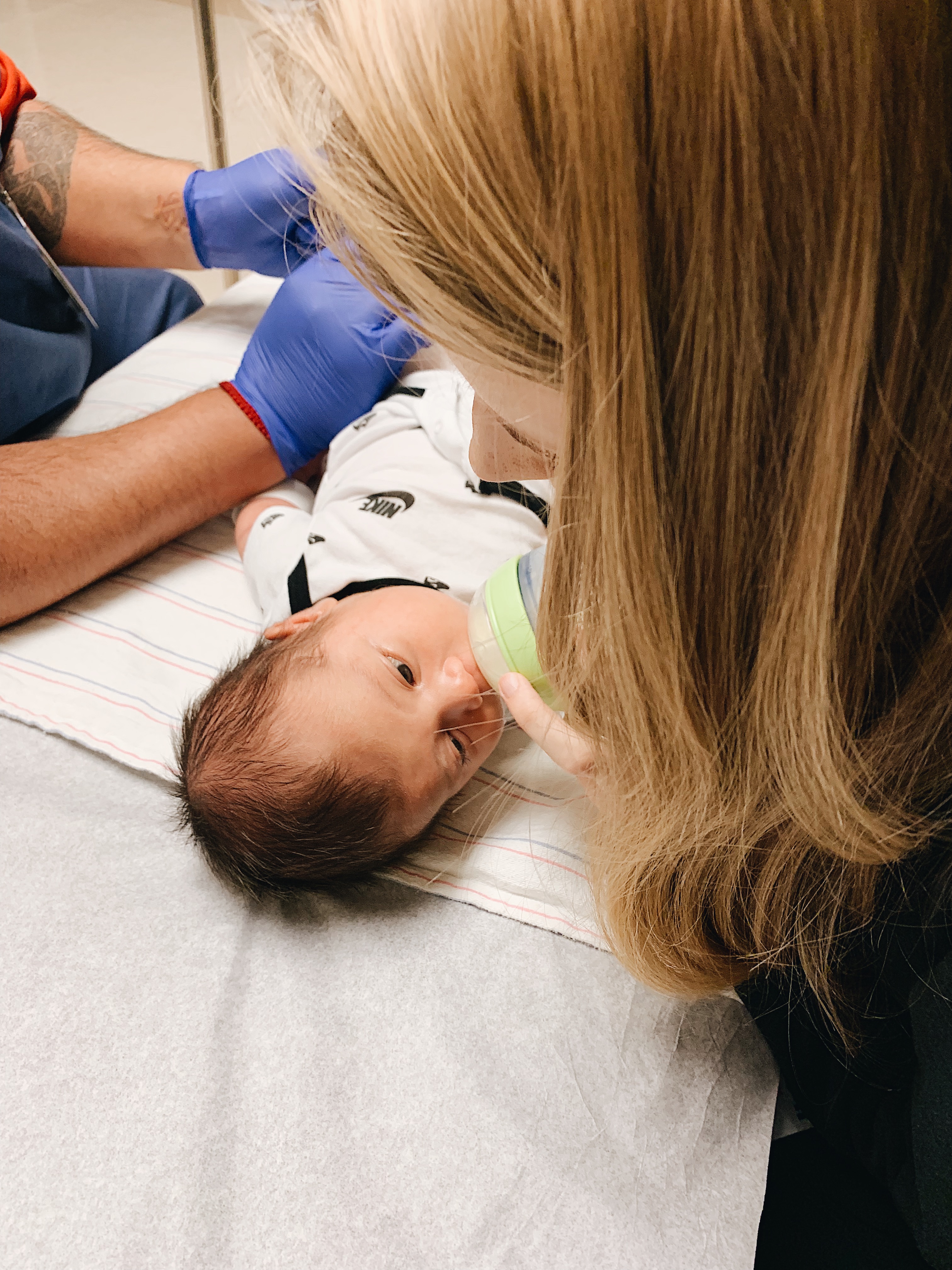 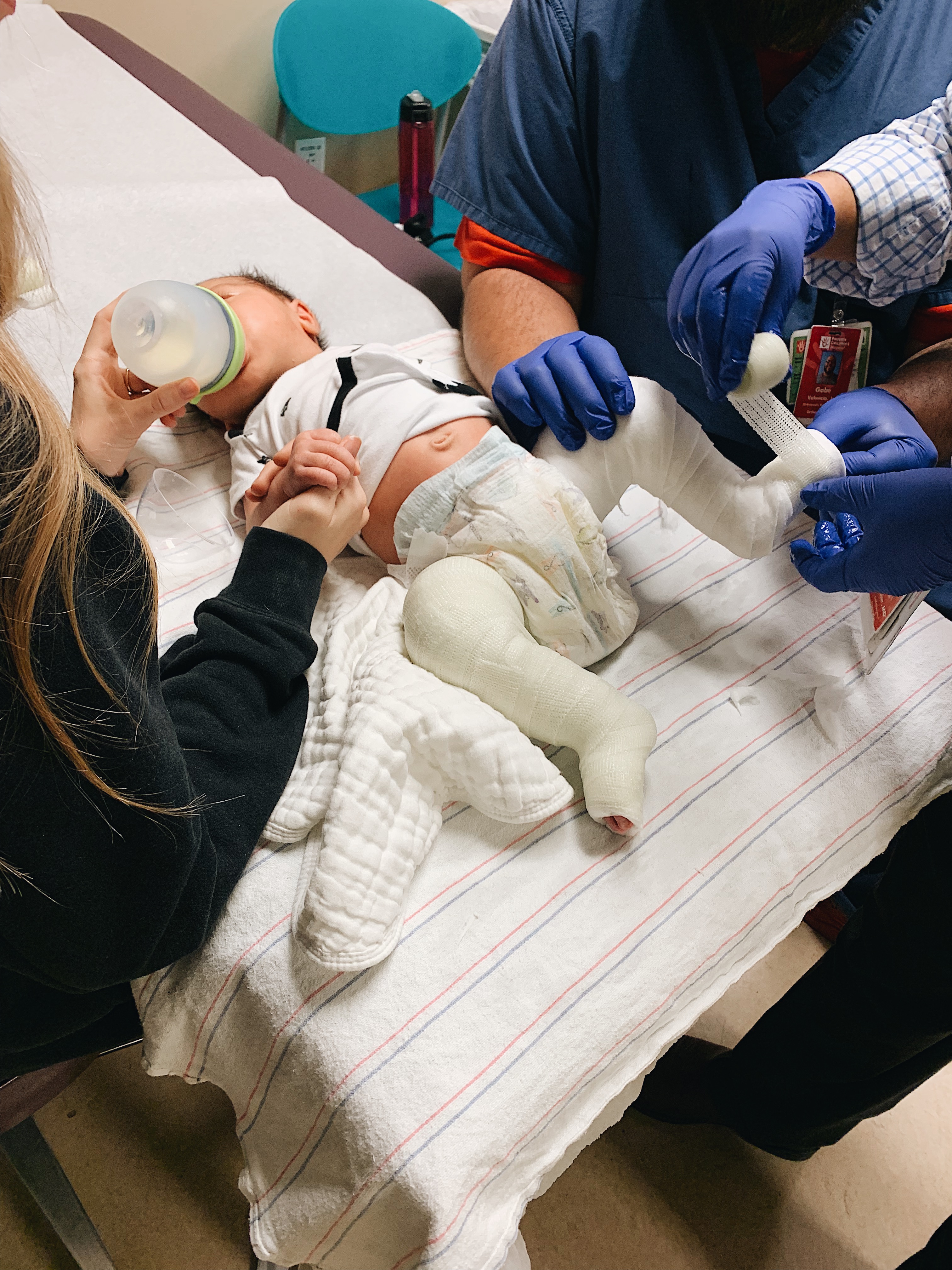 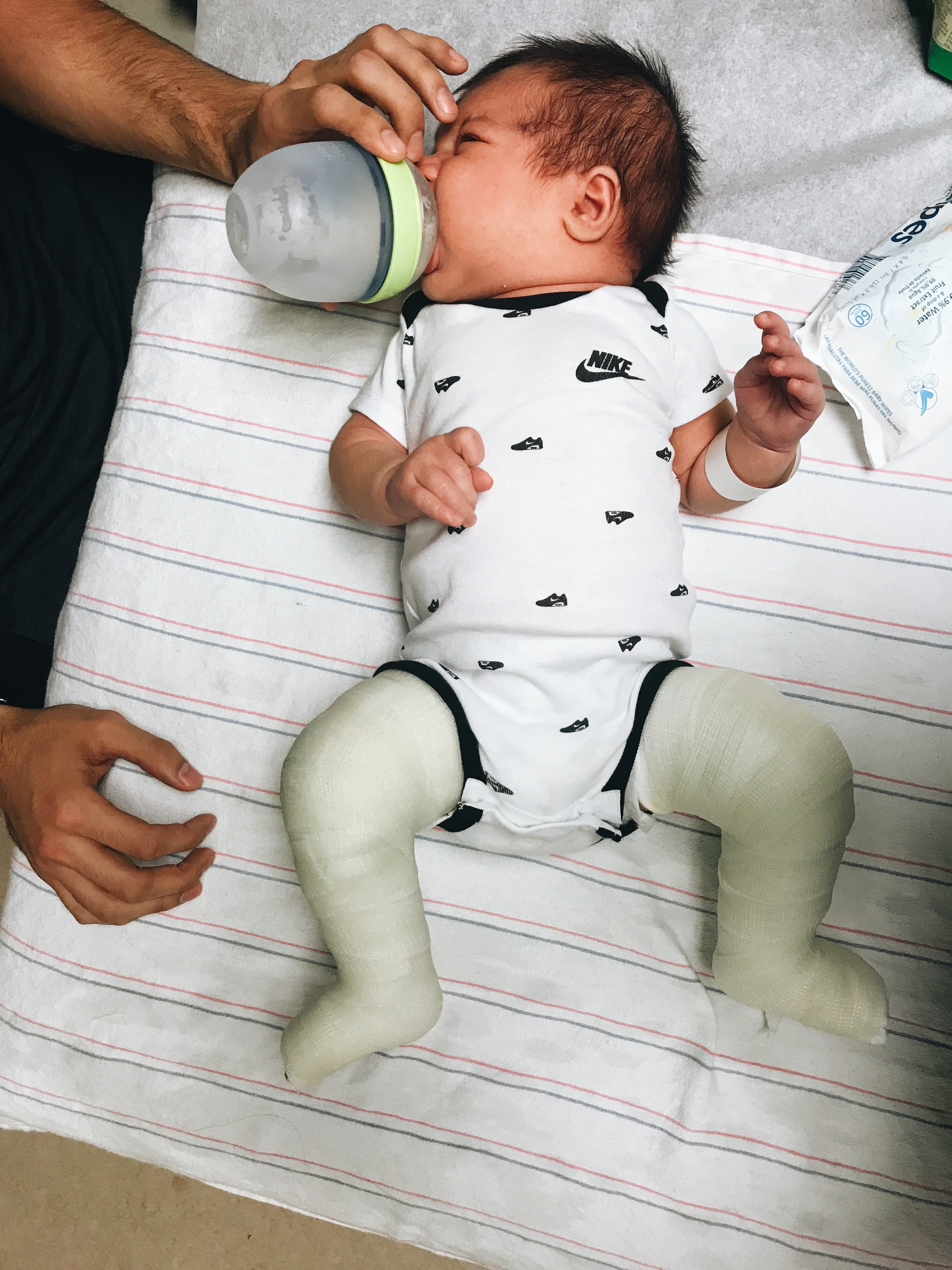 That first day was one of the worst days of my life. Up until this point Diego had been such a chill baby. He cried when he was tired and hungry, but nothing crazy. He slept all morning after getting casted, so we thought we were in the clear. But when he woke up, he woke up screaming. Not his normal little whiny cry, but straight up bloody murder. We had no idea what to do and just felt so helpless. You could tell he was sooooo frustrated that he couldn’t move his legs. And with his restricted movement he couldn’t get out all his tummy bubbles making him super gassy and grumpy. It was Juan’s birthday and we tried to go out for lunch and to the Nike store. Diego screamed all through lunch and nothing would calm him down. Then we took it easy at home for a bit and went to grab dinner and again, he screamed the whole time. We just spent the whole time taking turns holding him outside Spinato’s. My parents came over that night to me crying and Juan trying to calm down Diego who was also crying. My dad showed us how to hold him on his tummy and that calmed him right down. He could finally relax and get some farts out ha! It was a rough night and I was so sad that I couldn’t hold him, wrap him up, or dress him up like I normally did because the casts were so bulky. But after a few days it became the new norm and Diego got used to the casts and everything was so much better. He’s a little champ! 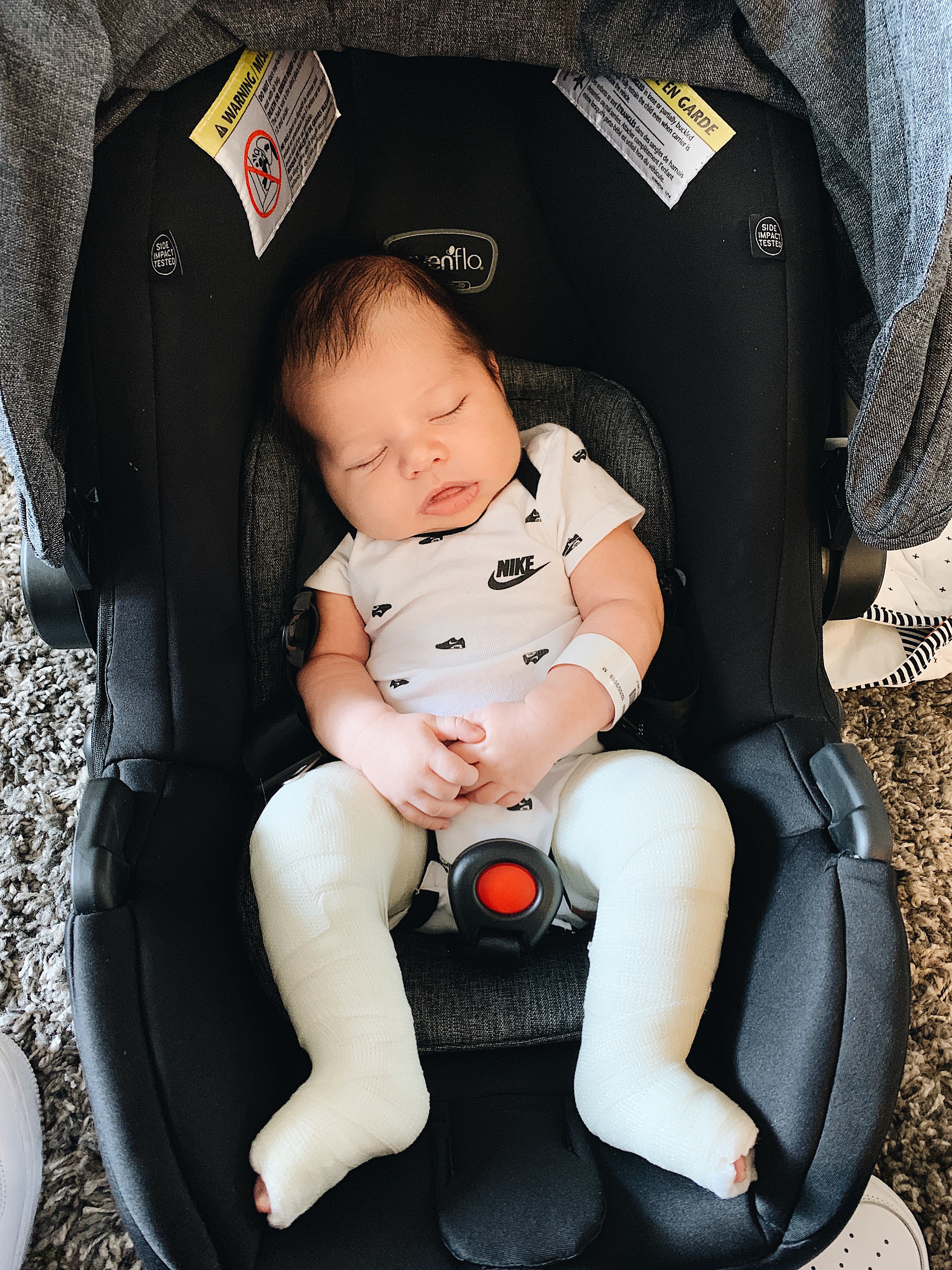 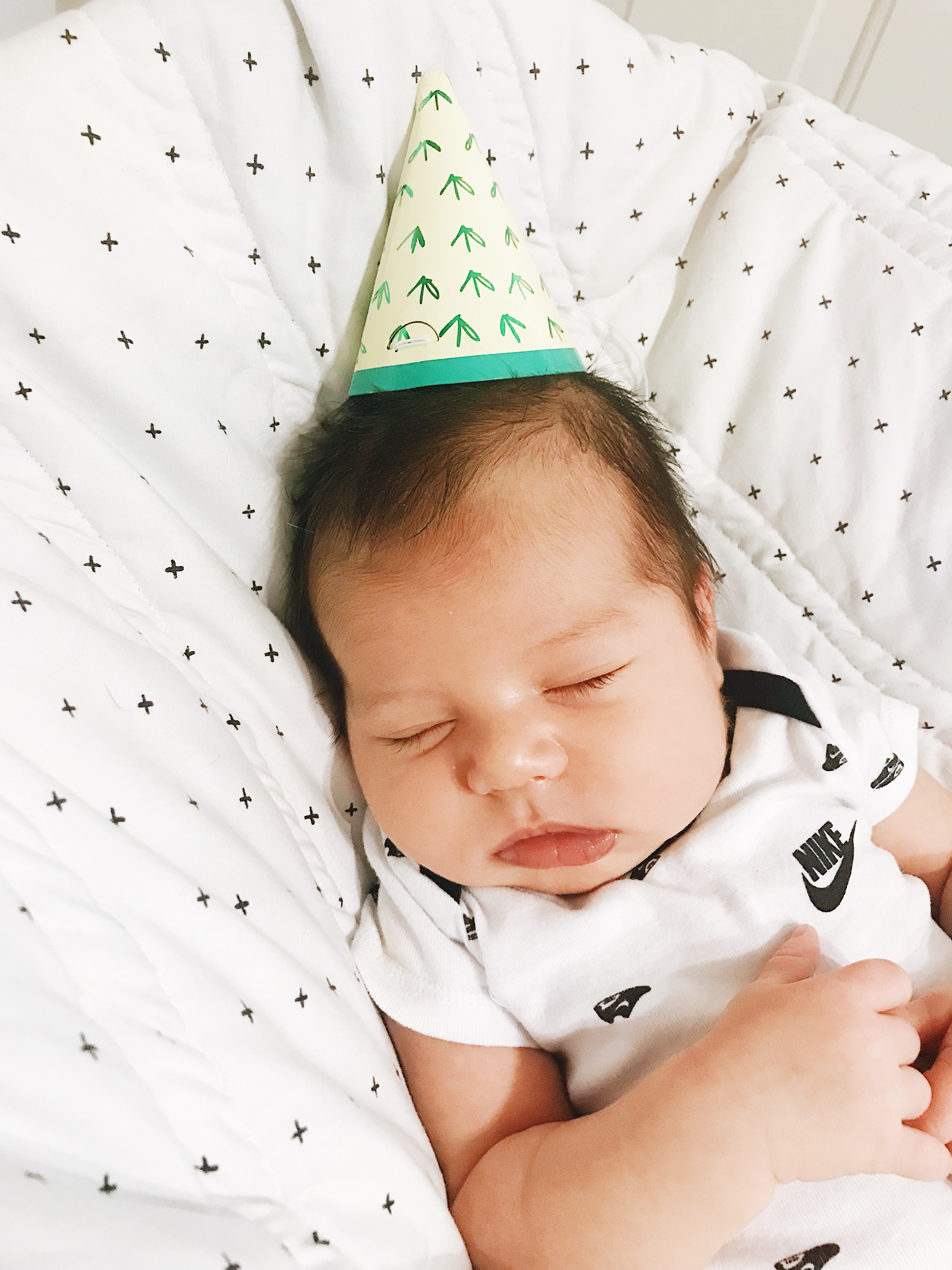 After the first week, we woke up at 5 AM the morning of his appointment and took the casts off and gave him a good thorough bath. Even after just a week I had missed his legs and feet so so much! He loved being able to kick around and it was kind of heartbreaking to know that he would only be cast-free for a few hours. We snuggled him as much as we possibly could in the waiting room. His feet already looked SO much better. The second casting was wayyy easier and Diego didn’t seemed too phased after. We knew now to massage his tummy move his legs around so he wouldn’t get too gassy. At this appointment though they dropped the bomb that he would most likely have to wear the boots and bar for at least a few months. So I of course cried again because I thought we only had to deal with this for a few weeks. Knowing it could be up to a year was so frustrating. Even though I knew it could be so much worse and that we should be so grateful it was something so minor. 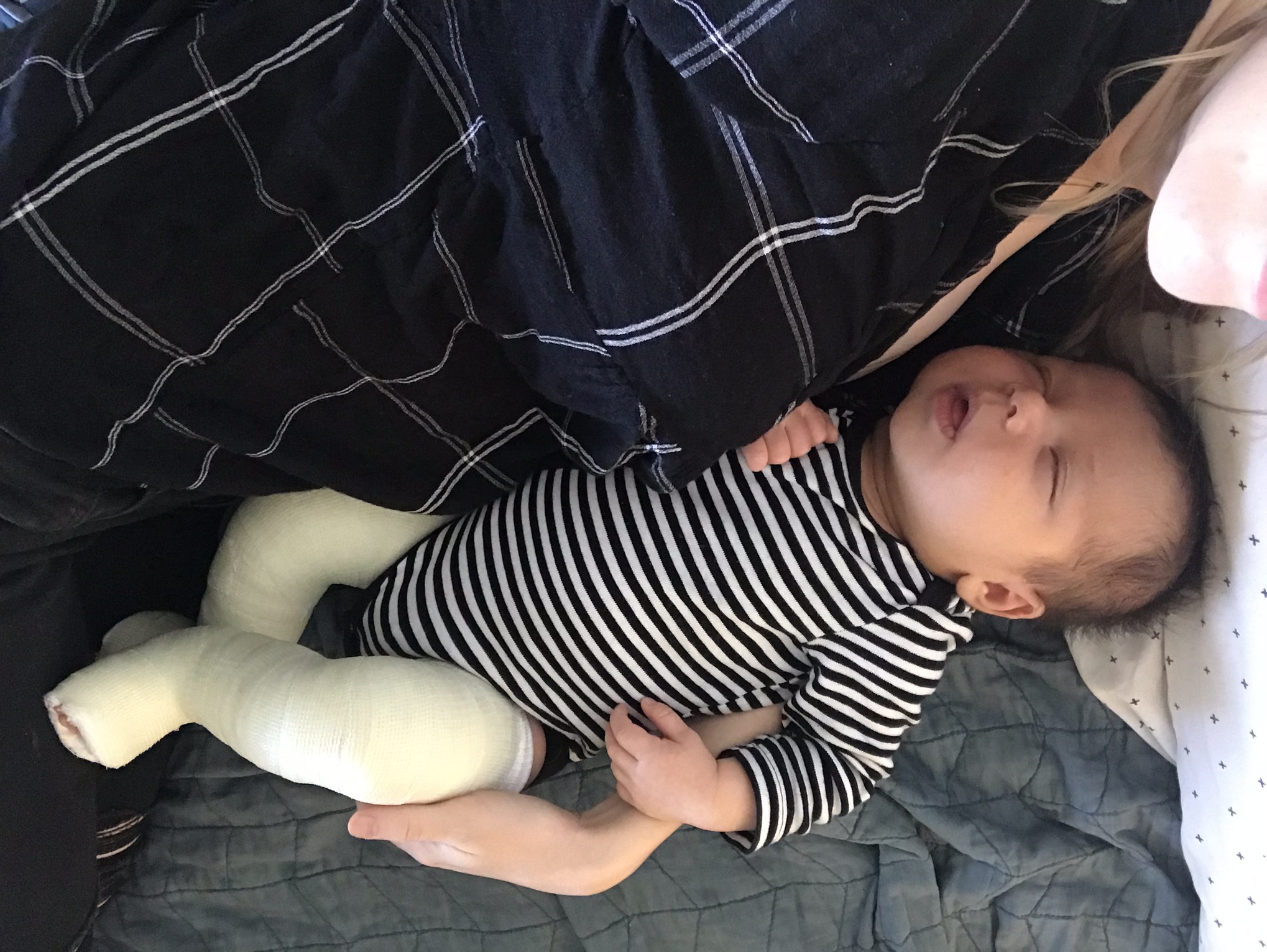 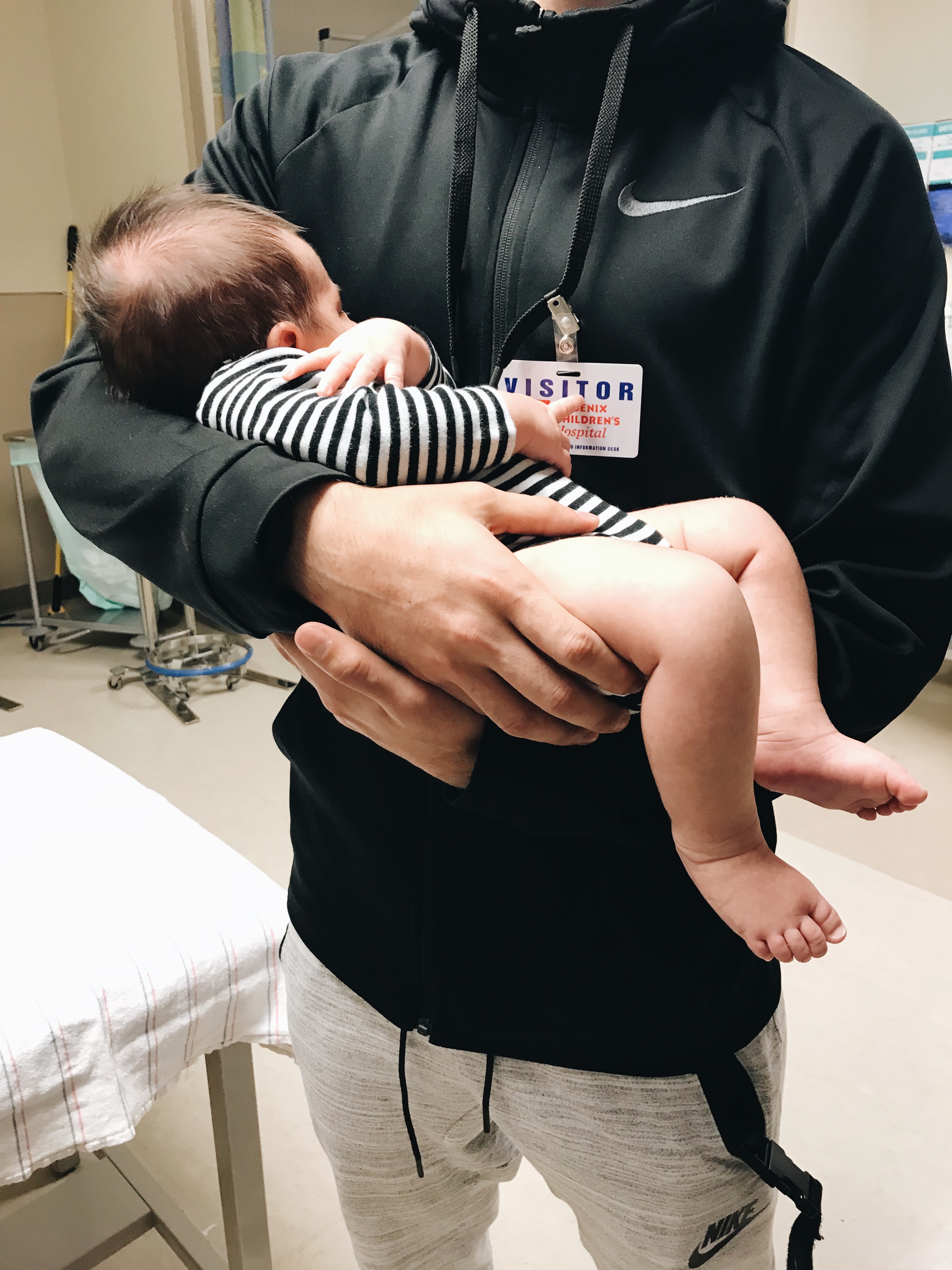 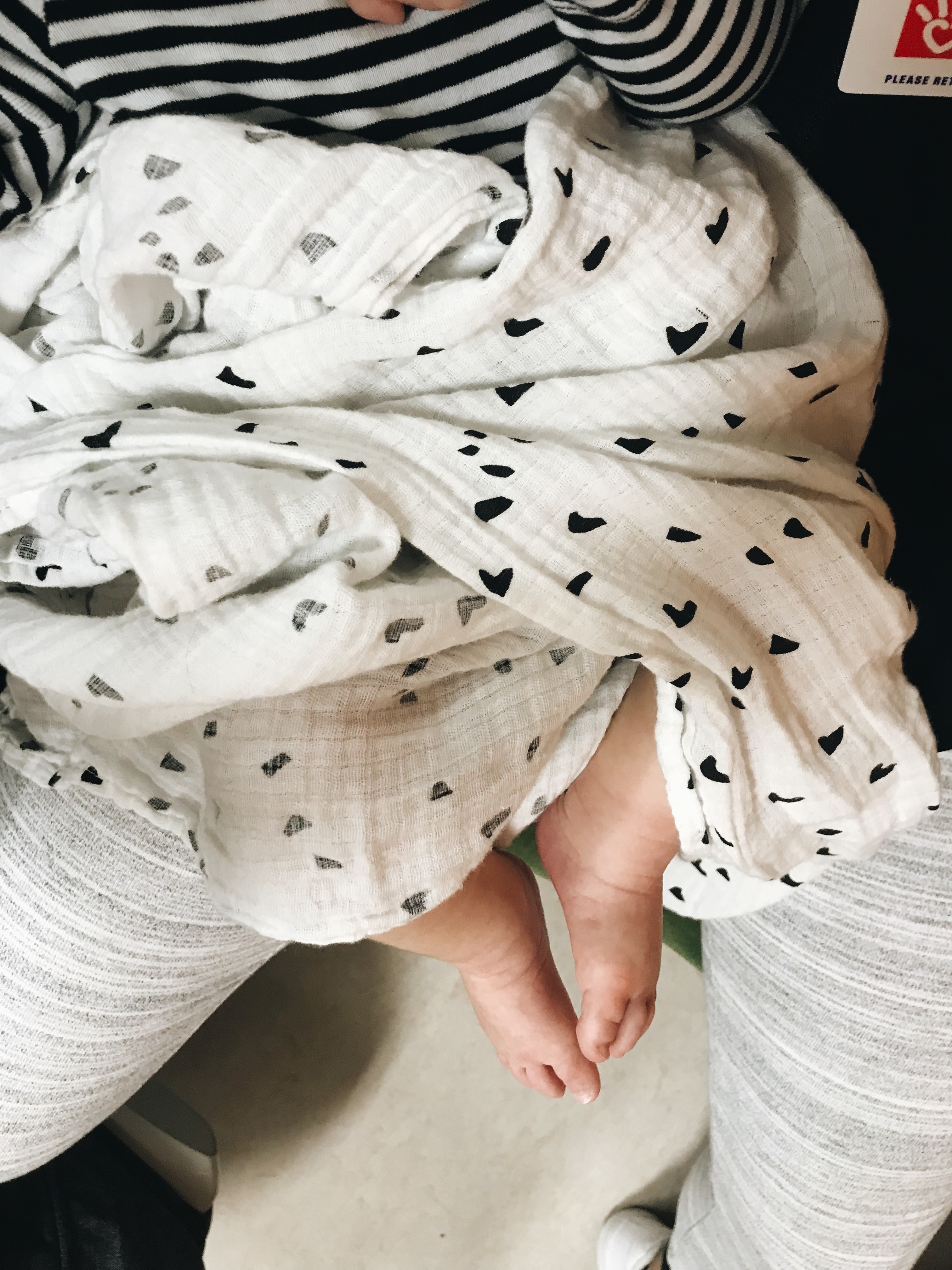 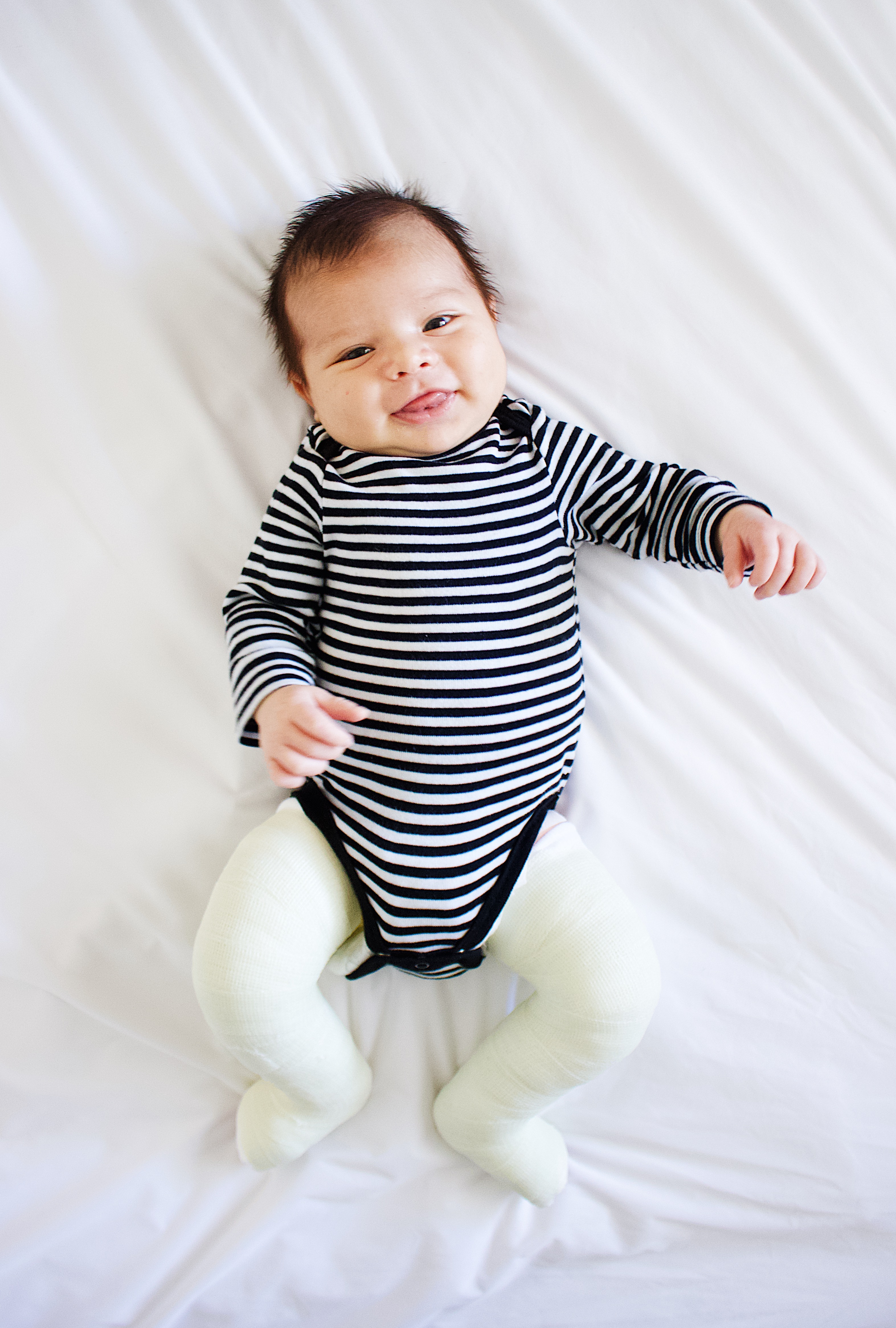 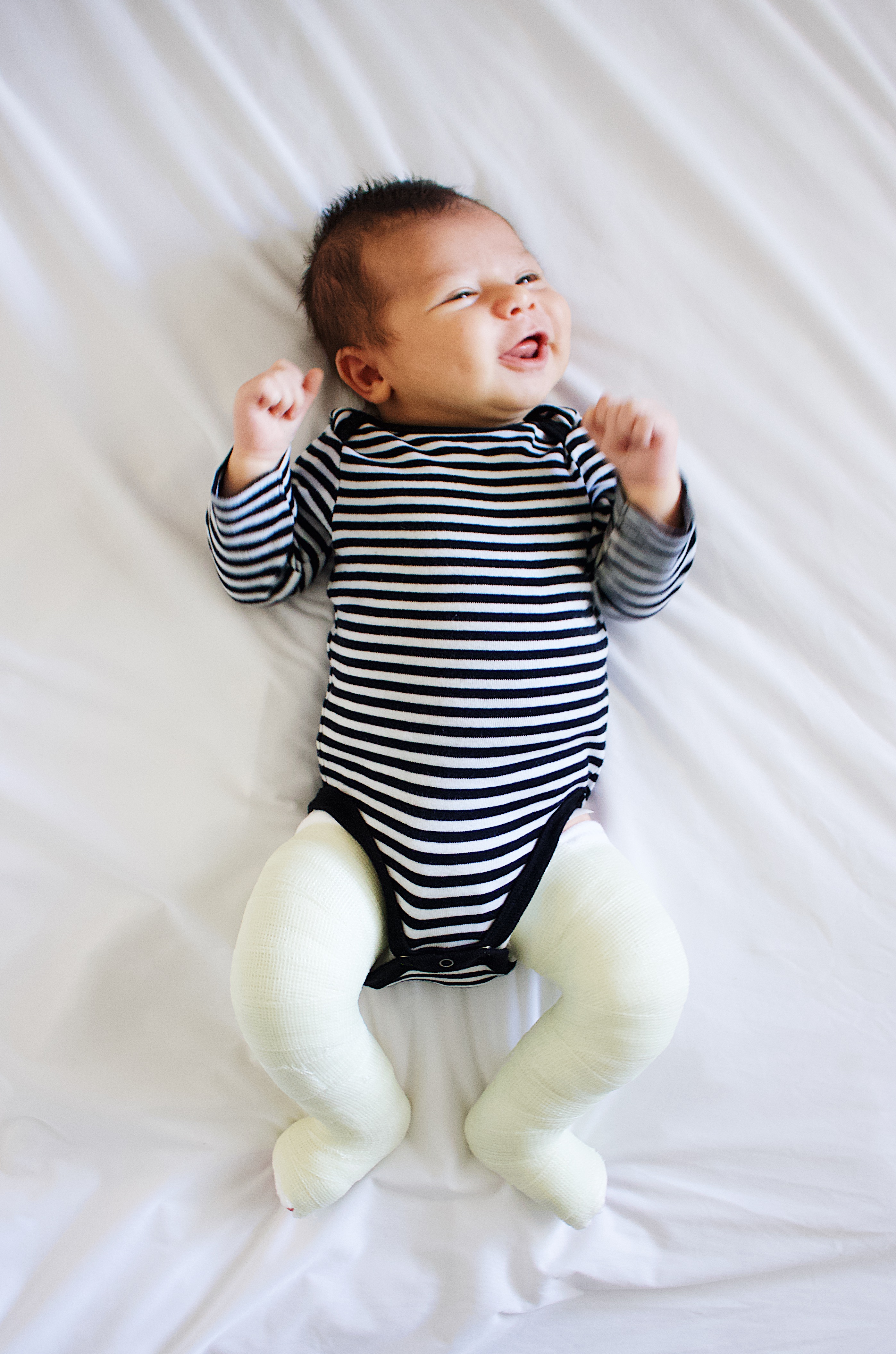 With his second cast, we wanted to spice it up a little bit and make it fun. We had David tag it up with some awesome designs and I let my class all sign it too! 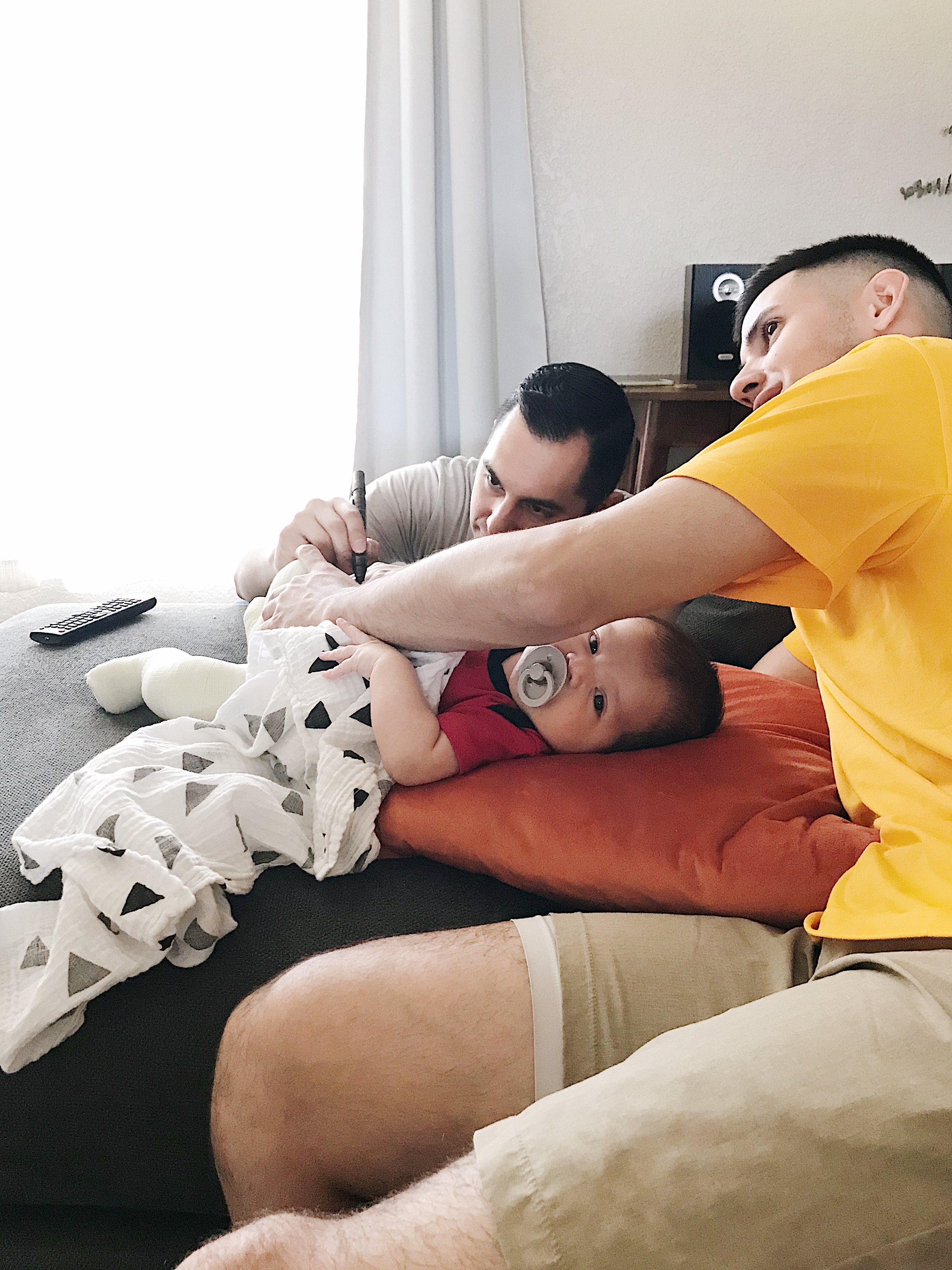 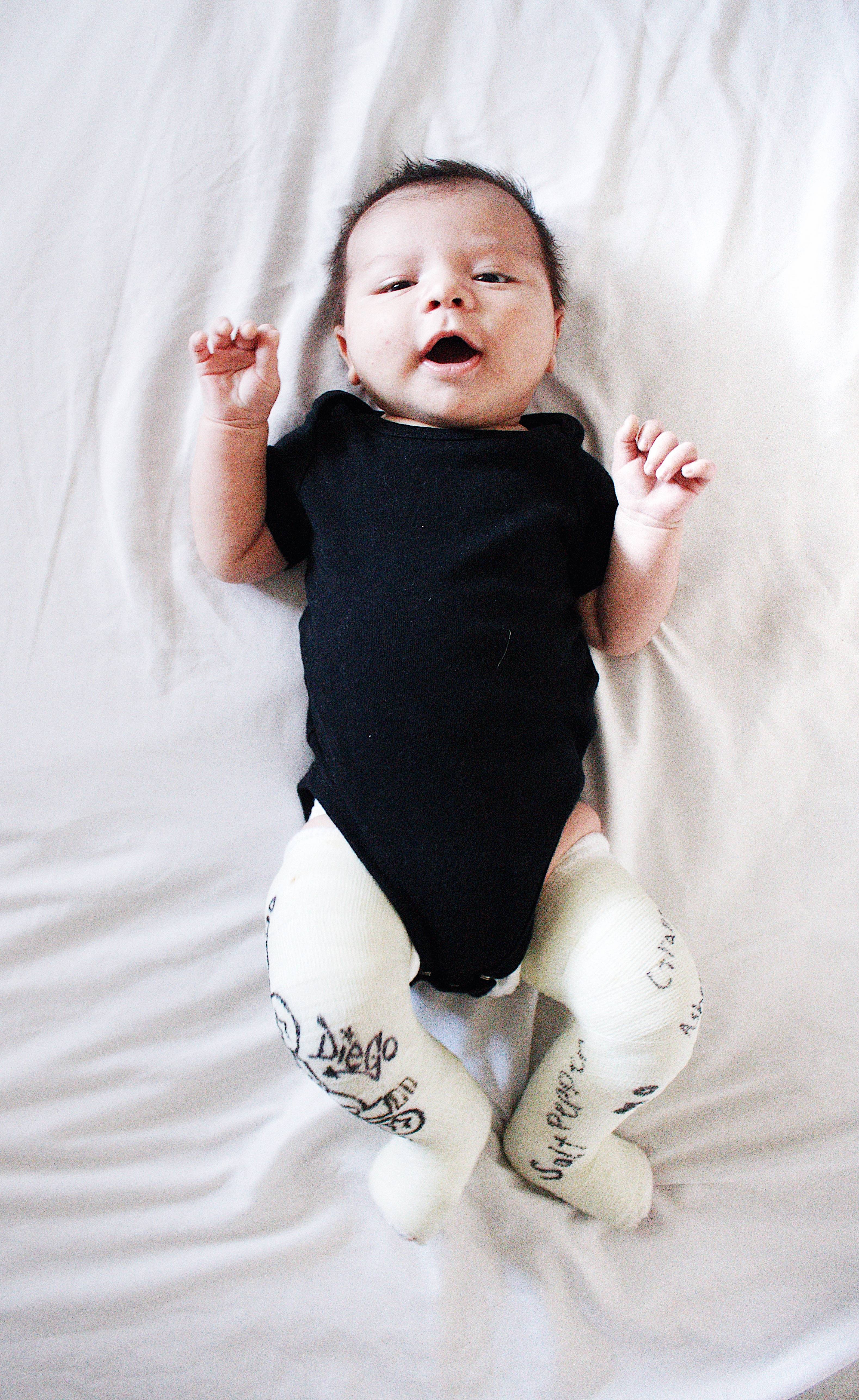 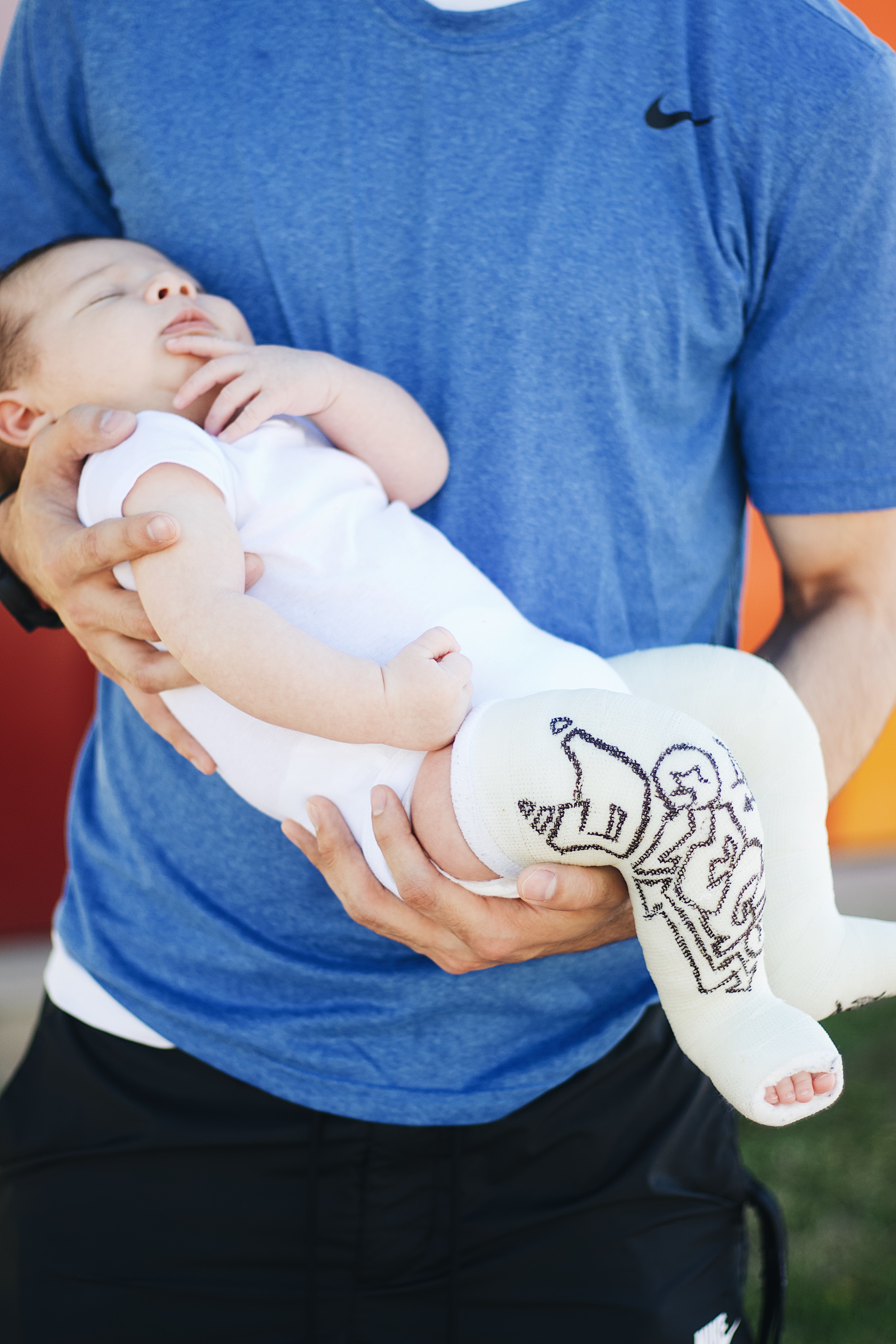 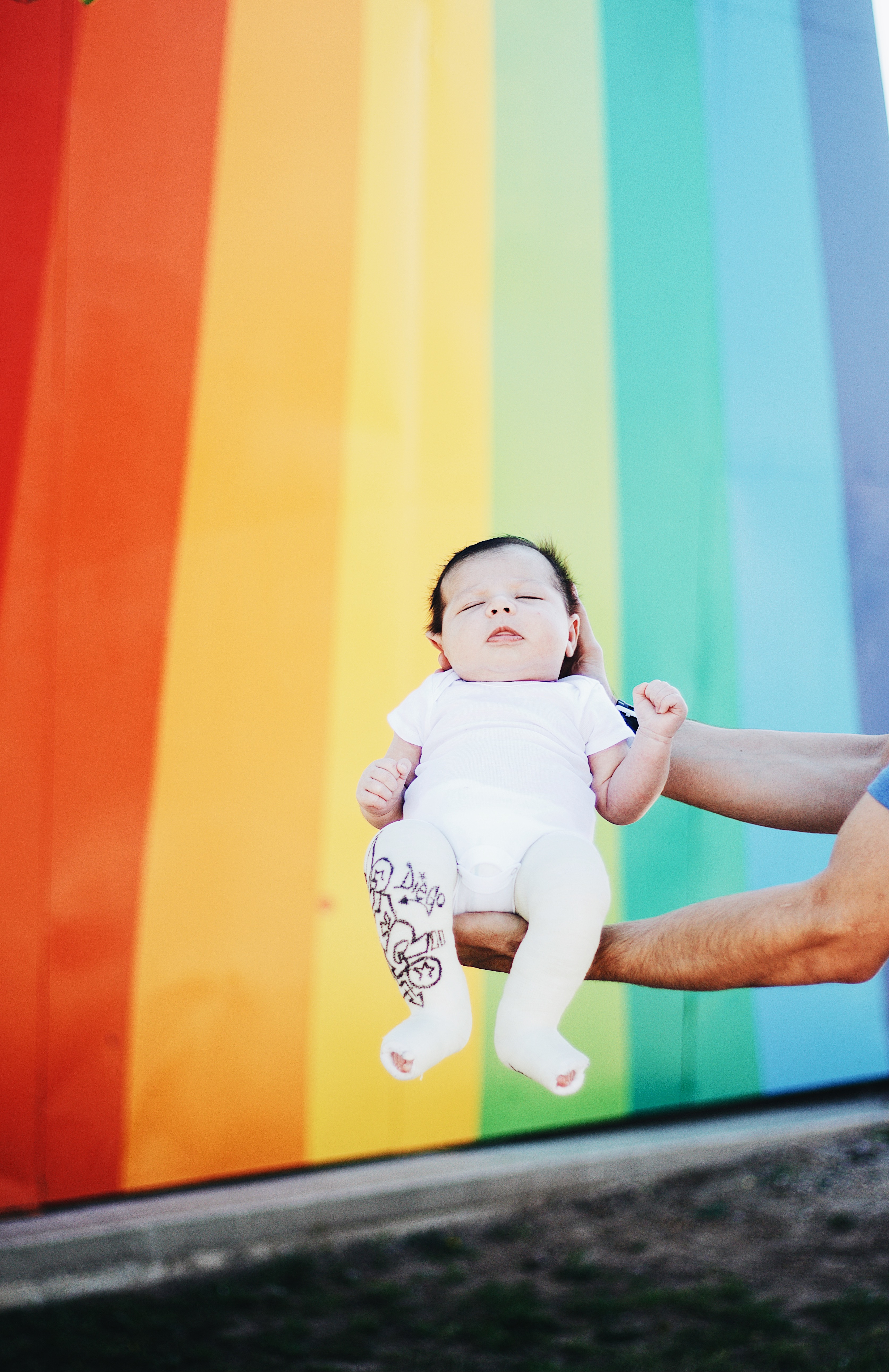 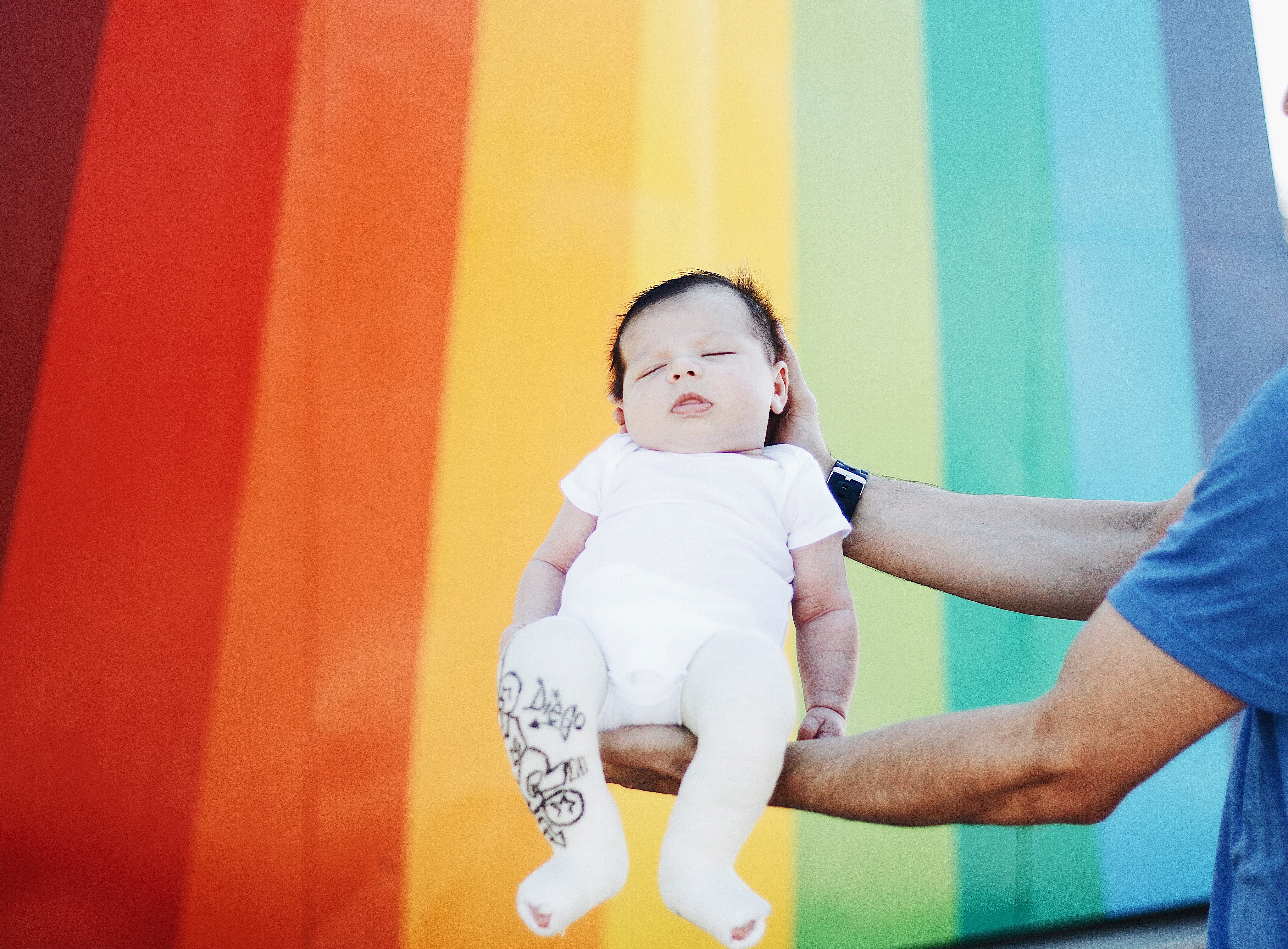 On the morning of his third casting, we were expecting at least another week or two of casts, or to be sent home with the boots and bar. I was trying to have a good attitude, but I wasn’t pumped. The doctor and a few nurses assistants walked into the casting room. Our doctor, who usually was stone faced and emotionless was actually smiling? So that was new. He walked over, looked at Diego’s feet and said “They look good. Now you can just do the stretches and switch his shoes to the wrong feet for awhile.” We were shocked. No more casts AND no special shoes. We were like giddy little kids coming out of the hospital. We couldn’t be more grateful for modern medicine and sooooooo grateful to be done with this casting chapter! 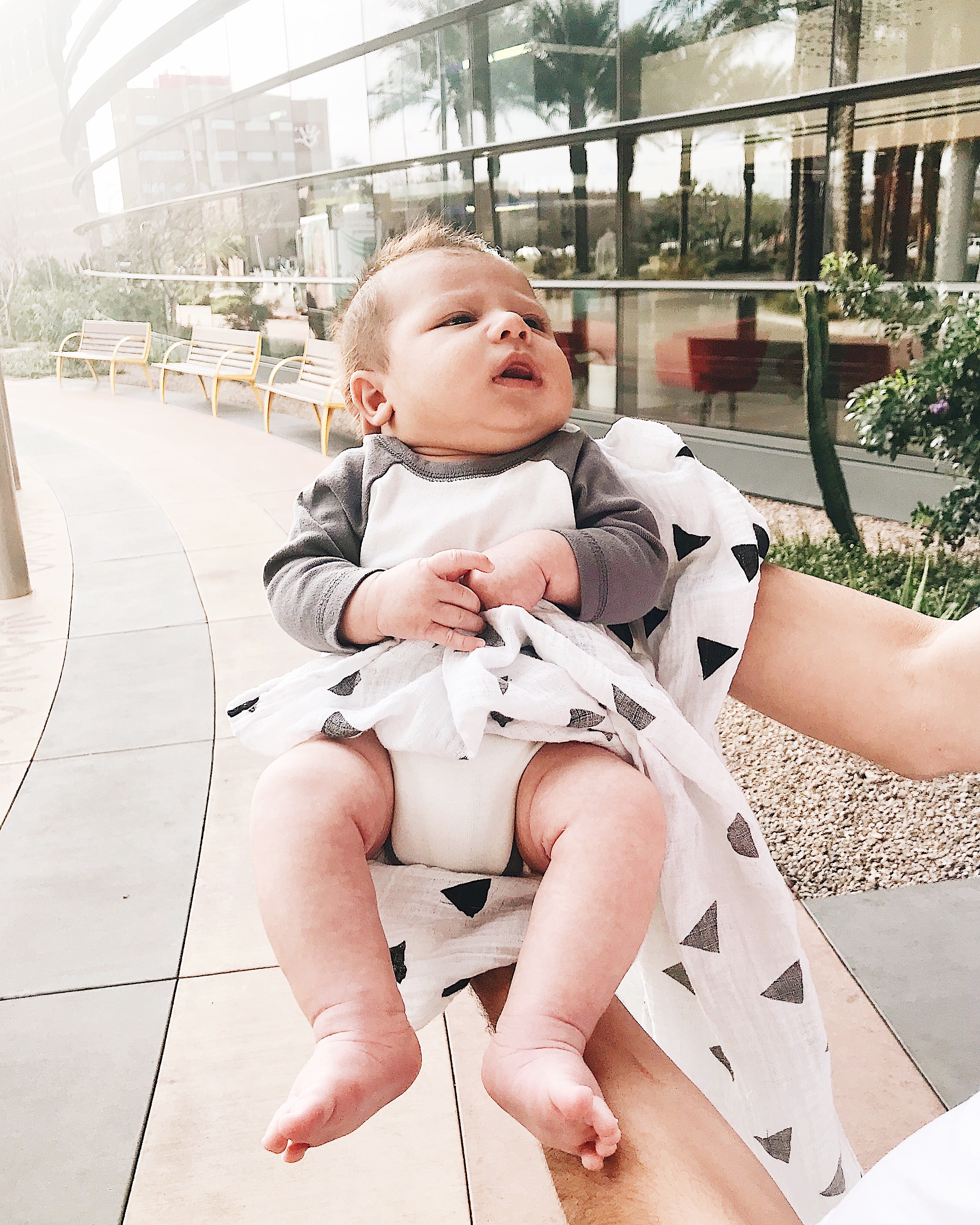