December started off the way all Decembers should with FREE Bahama Bucks day! When I’m pregnant, there are few things that sound as good as some nice cold shaved ice. 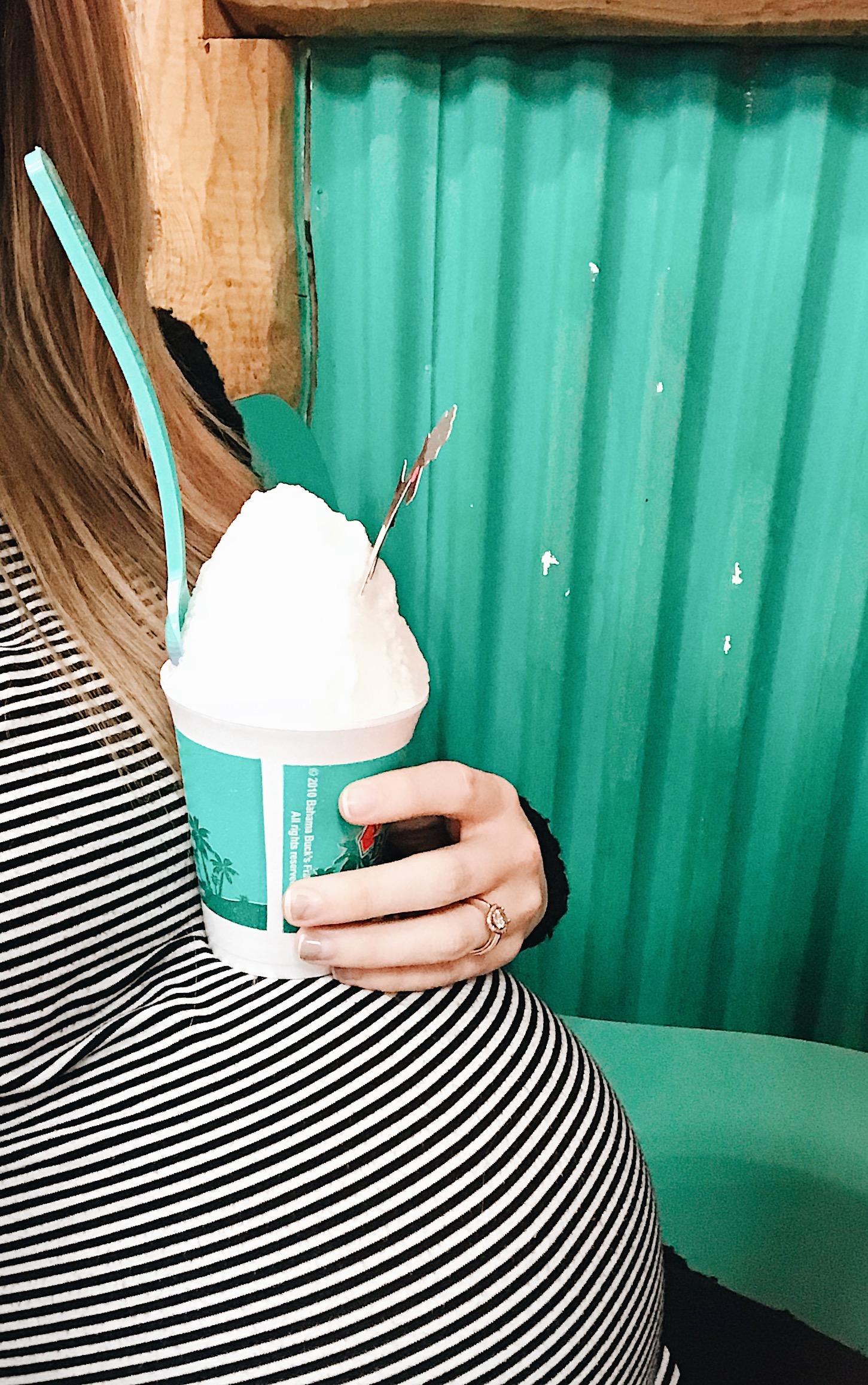 We made several trips to IKEA to buy all sorts of things for the house and the baby’s room. Late one night we made an impulse run and brought home and set up the crib. That made things real official. And gave Juan the excuse to lay out every single Nike outfit he’d collected for the baby thus far. Yes, he is obsessed. 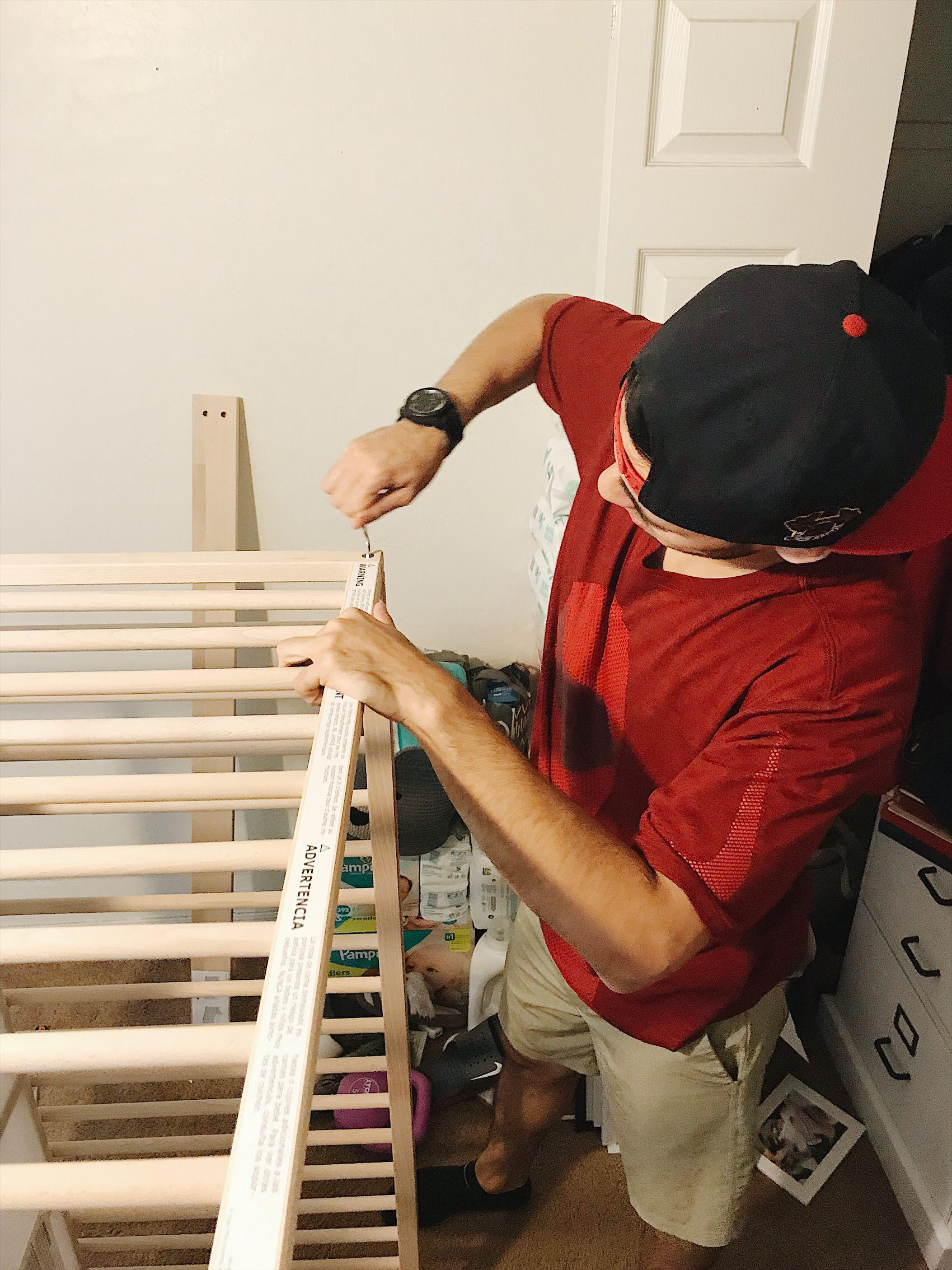 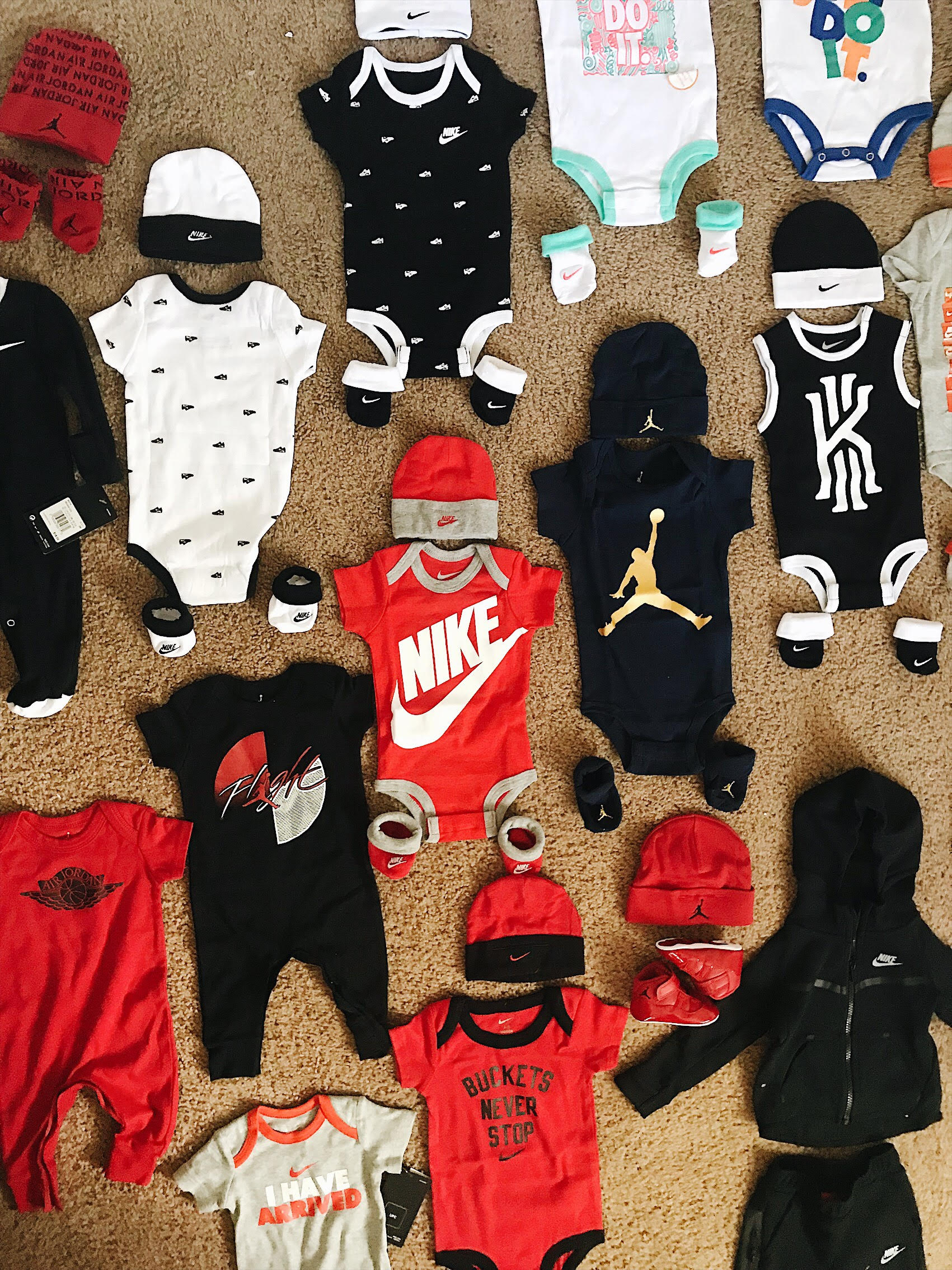 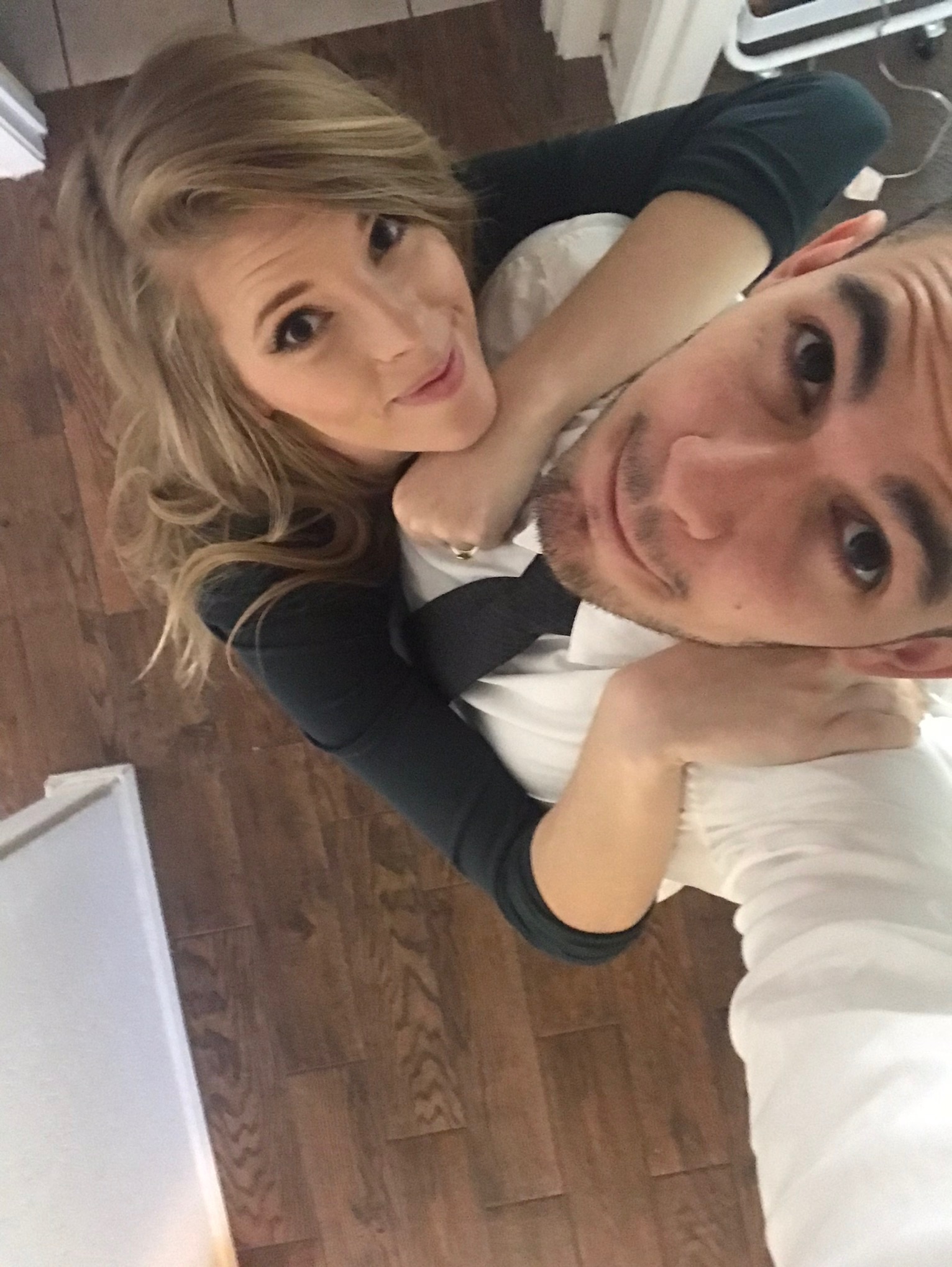 One of my FAVORITE things we did was have a cousin Christmas party at a karaoke lounge in Tempe. When we got there they upgraded us to the big room which had a stage and dancing poles. We couldn’t have asked for anything more. 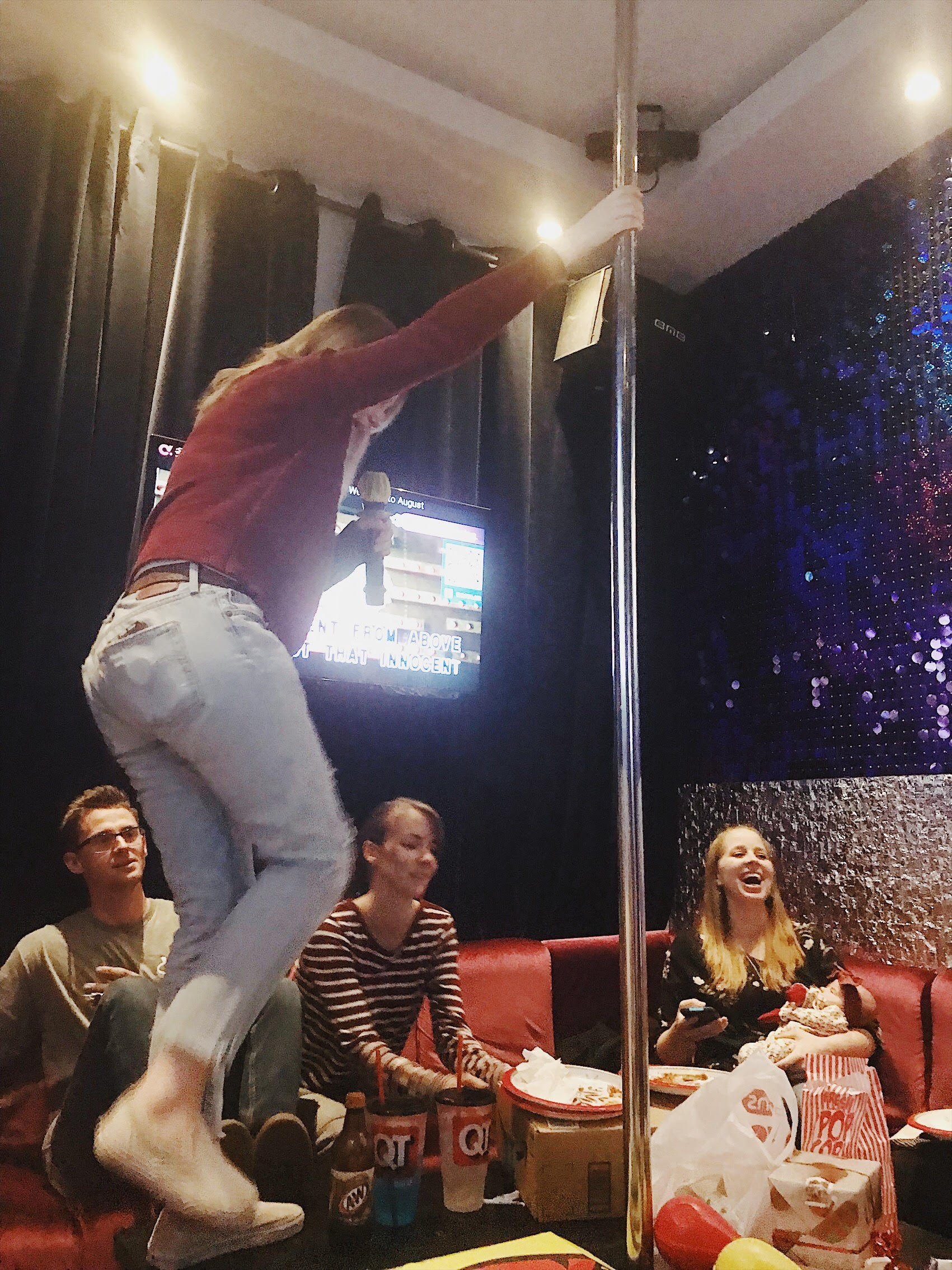 It was one of my warmer winters to date seeing as I was carrying around my own personal furnace. And by this time, no amount of sweatshirts or cozy clothes could hide my bump. But in the gloriousness of winter, I found every excuse to wear sweats and jammies and long sleeve shirts from the mens section. 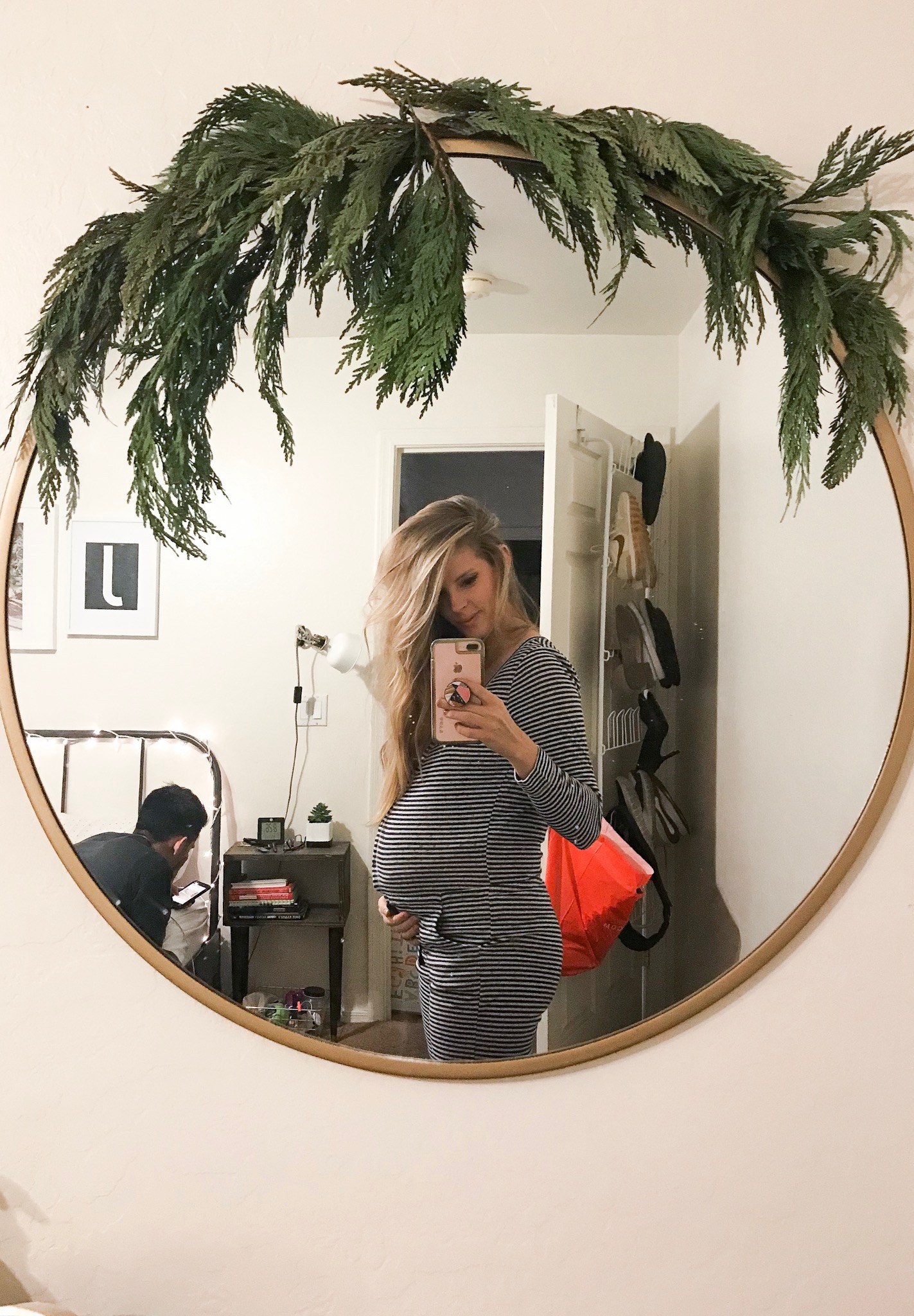 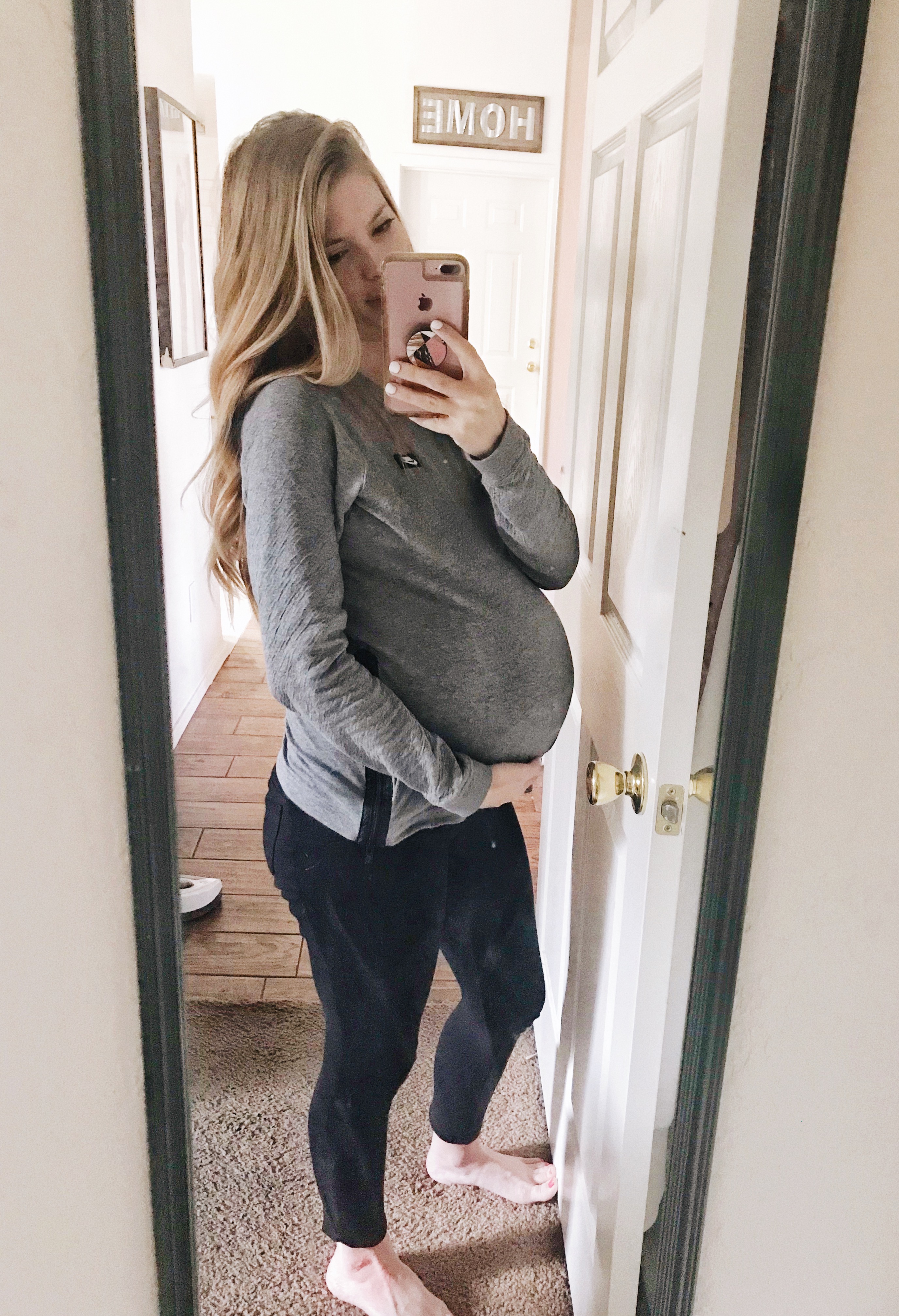 I always love designing and sending out Christmas cards. Which got me so excited this year thinking that in just a year there would be three of us on the card!! 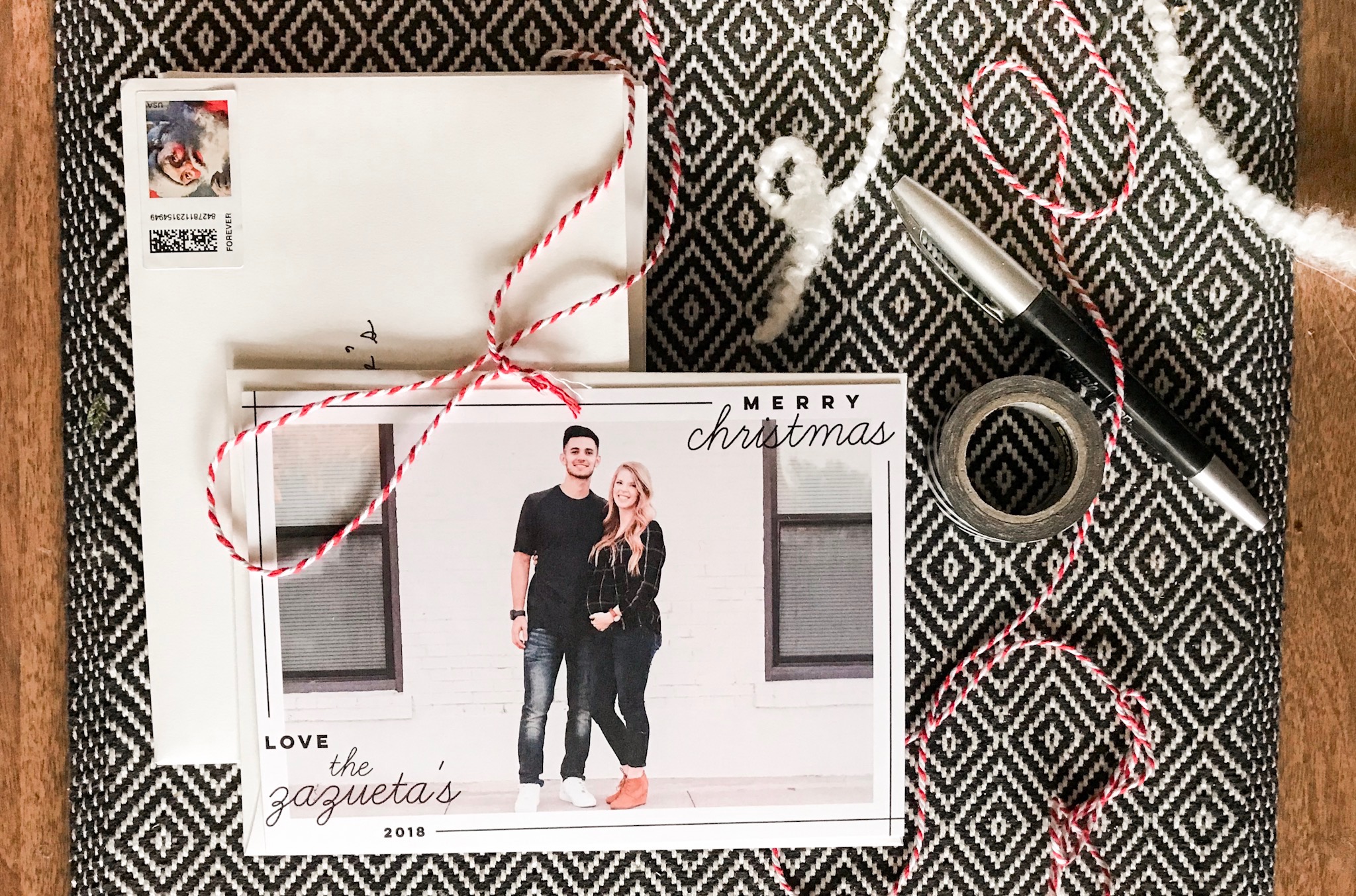 One night my family got together and had a gingerbread house making contest. It was fun to see what everyone came up with and was the perfect excuse to binge eat a ton of candy. Also, spilling on myself is now inevitable due to my exponentially growing belly. 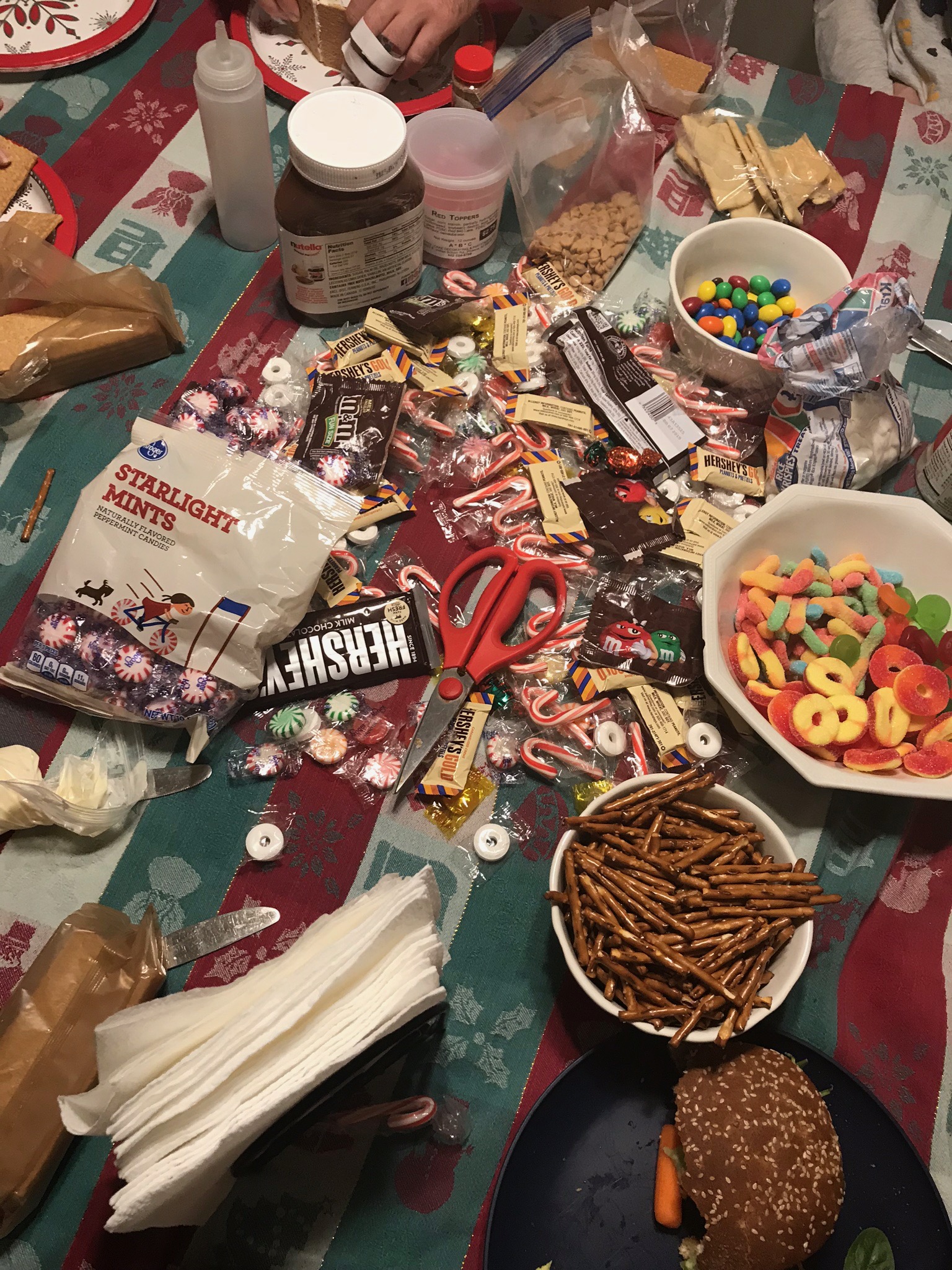 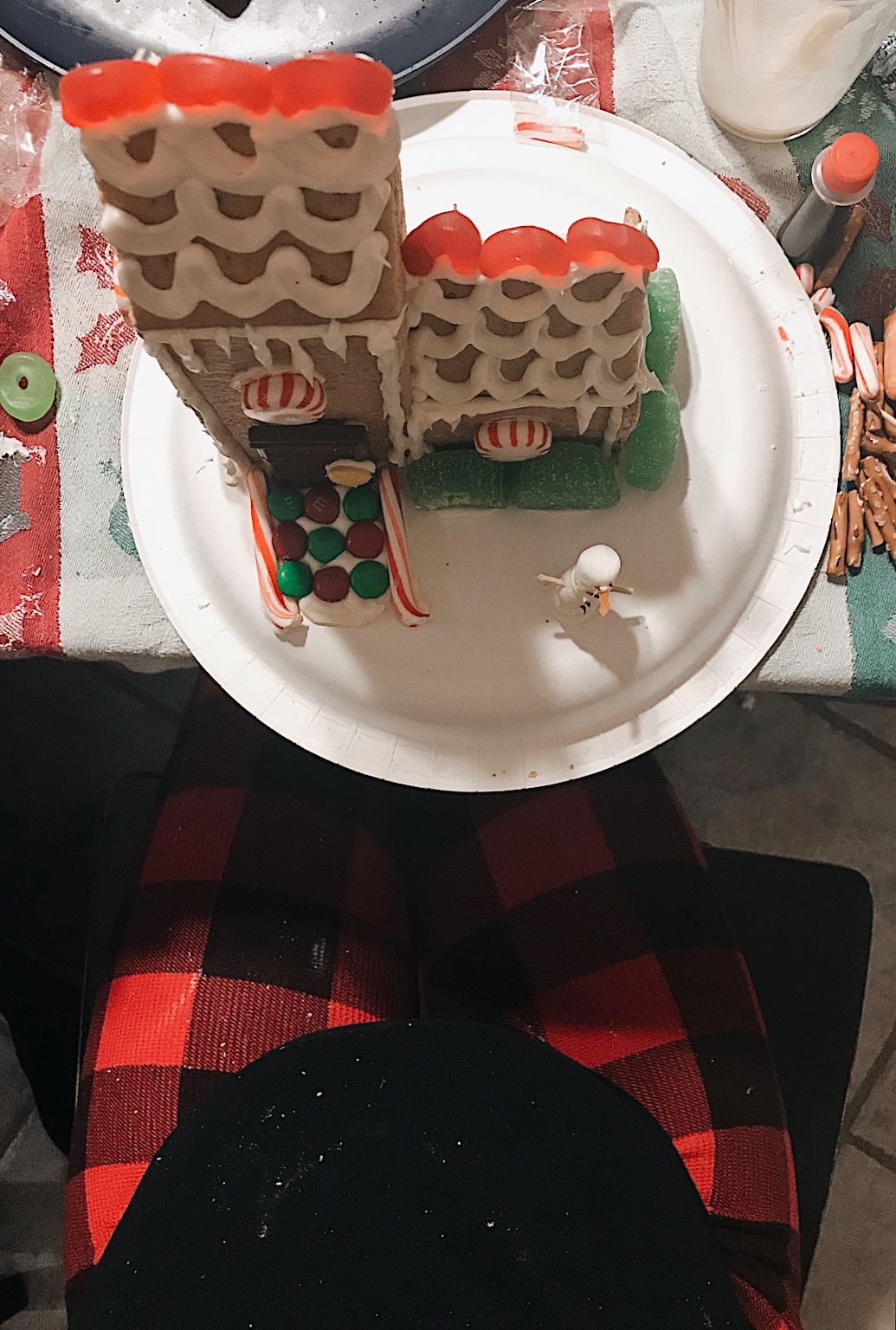 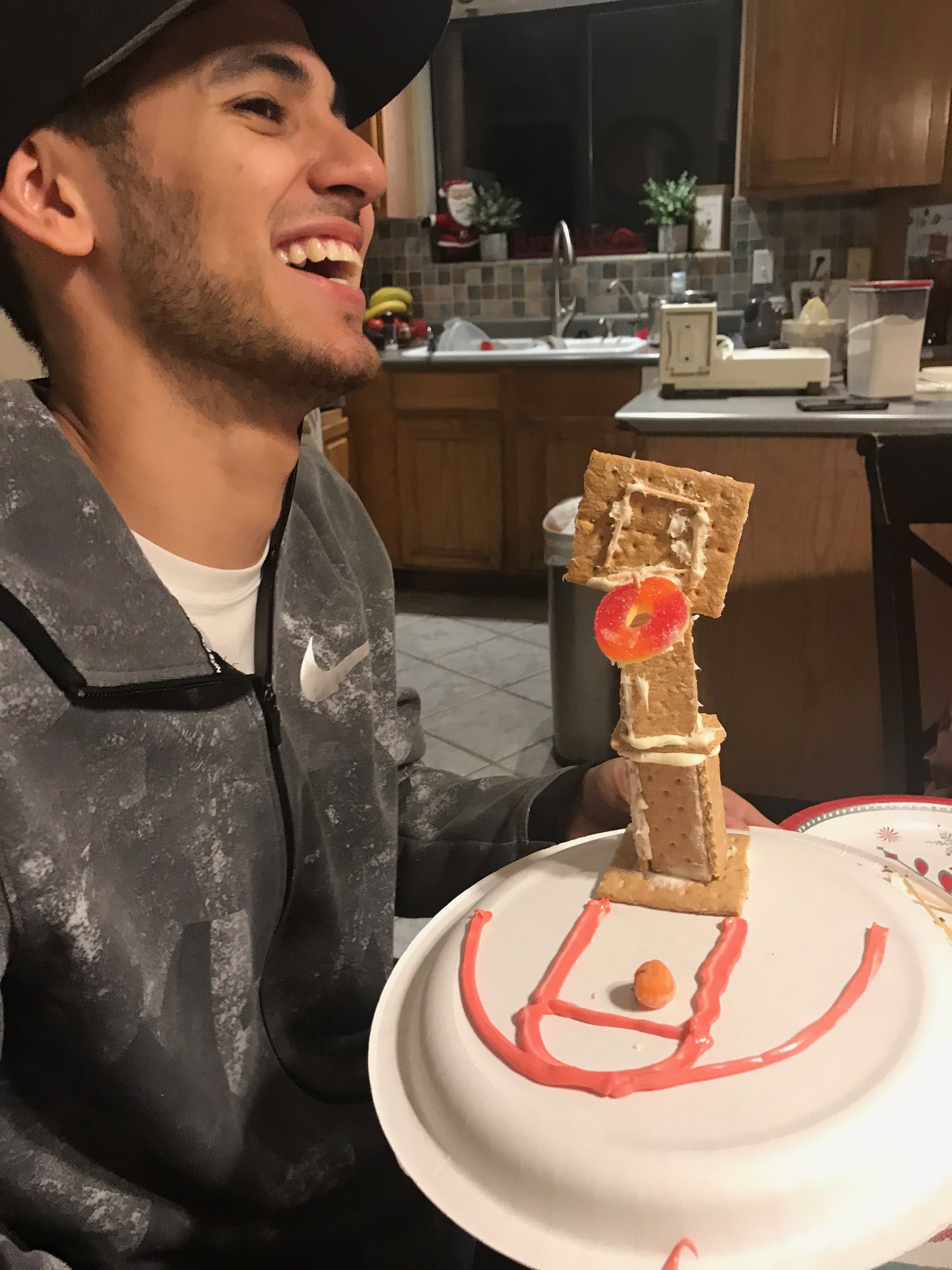 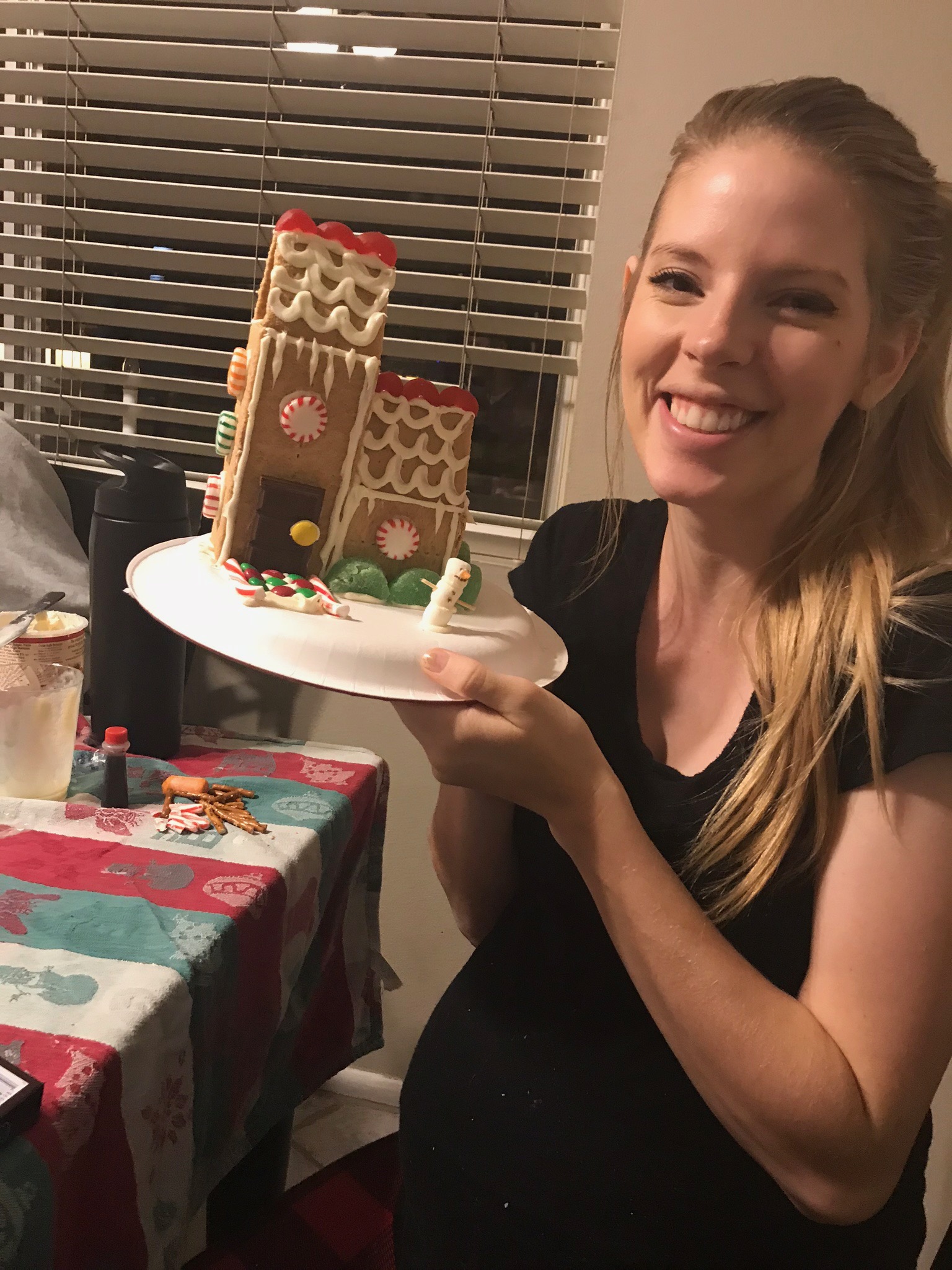 Juan had to go into work on Christmas Eve so he harnessed the Christmas spirit and decked himself out in red + green Nike. I’ve never been so proud. 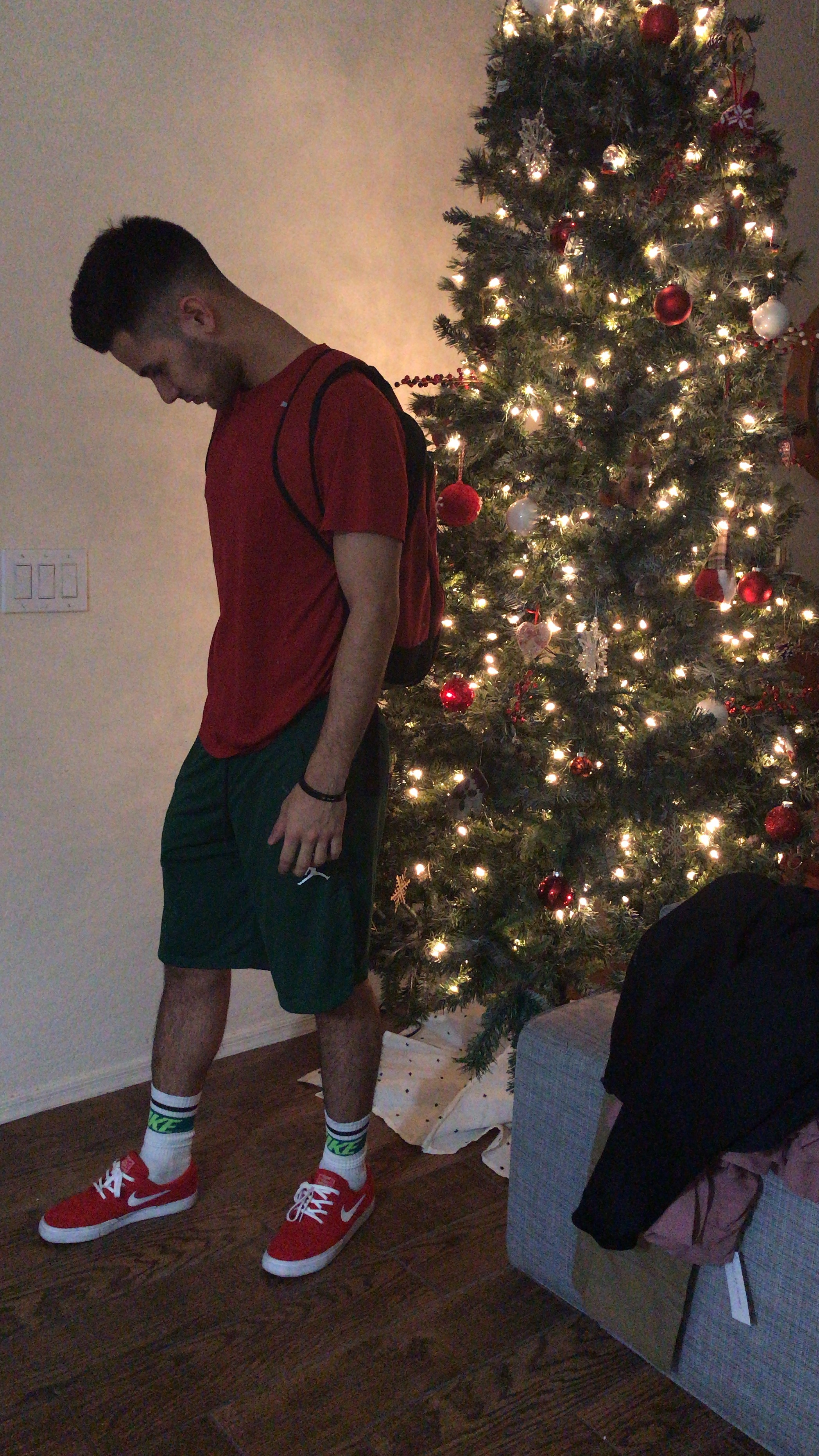 On Christmas Eve we had our usual dinner with Juan’s family and white elephant. I scored with an extendable electric loofa which I WILL put to good use since I can no longer reach my legs and feet in the shower ha! We opened presents just before midnight and then head home to get some sleep before heading to my parents on Christmas morning. 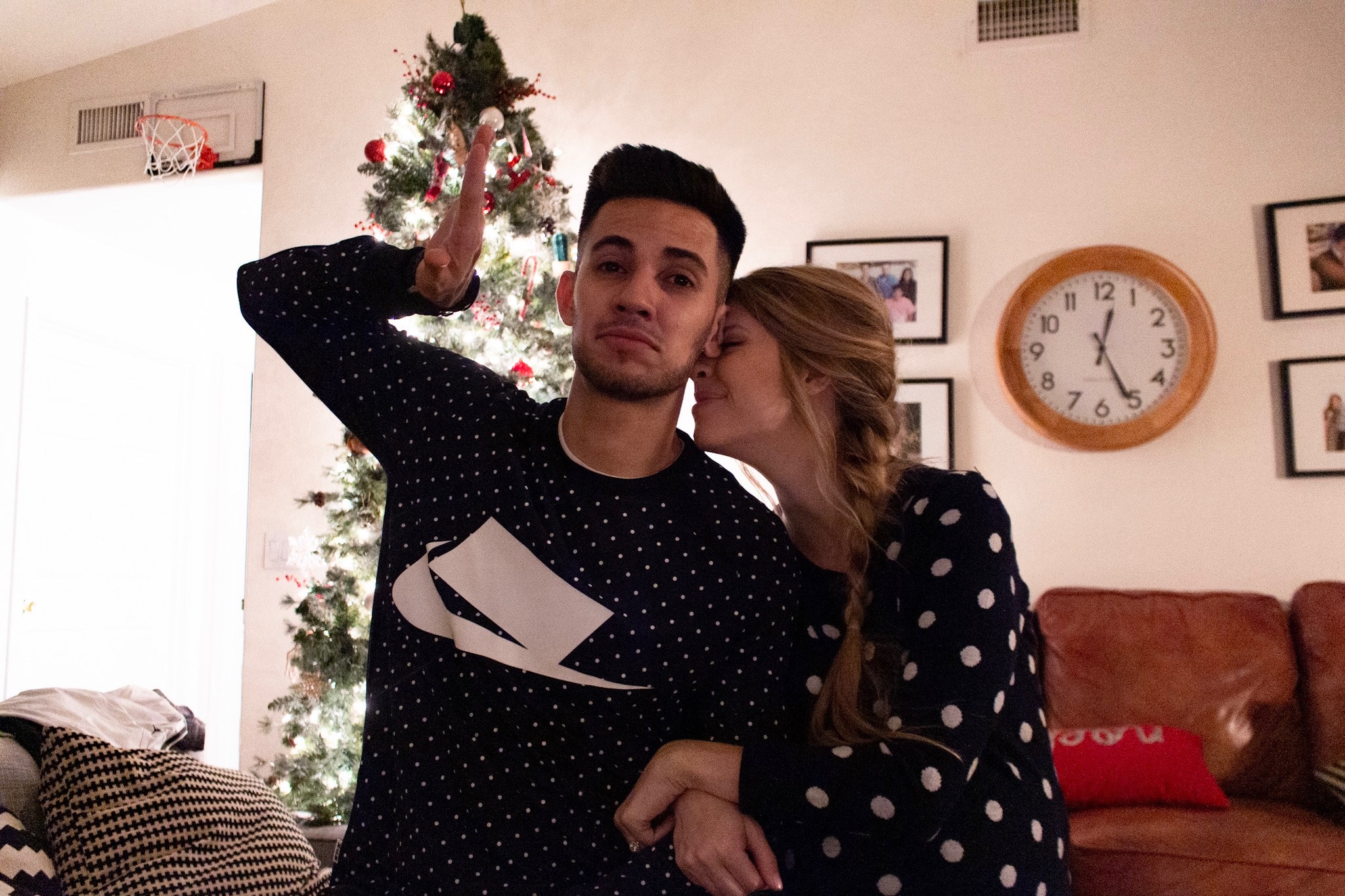 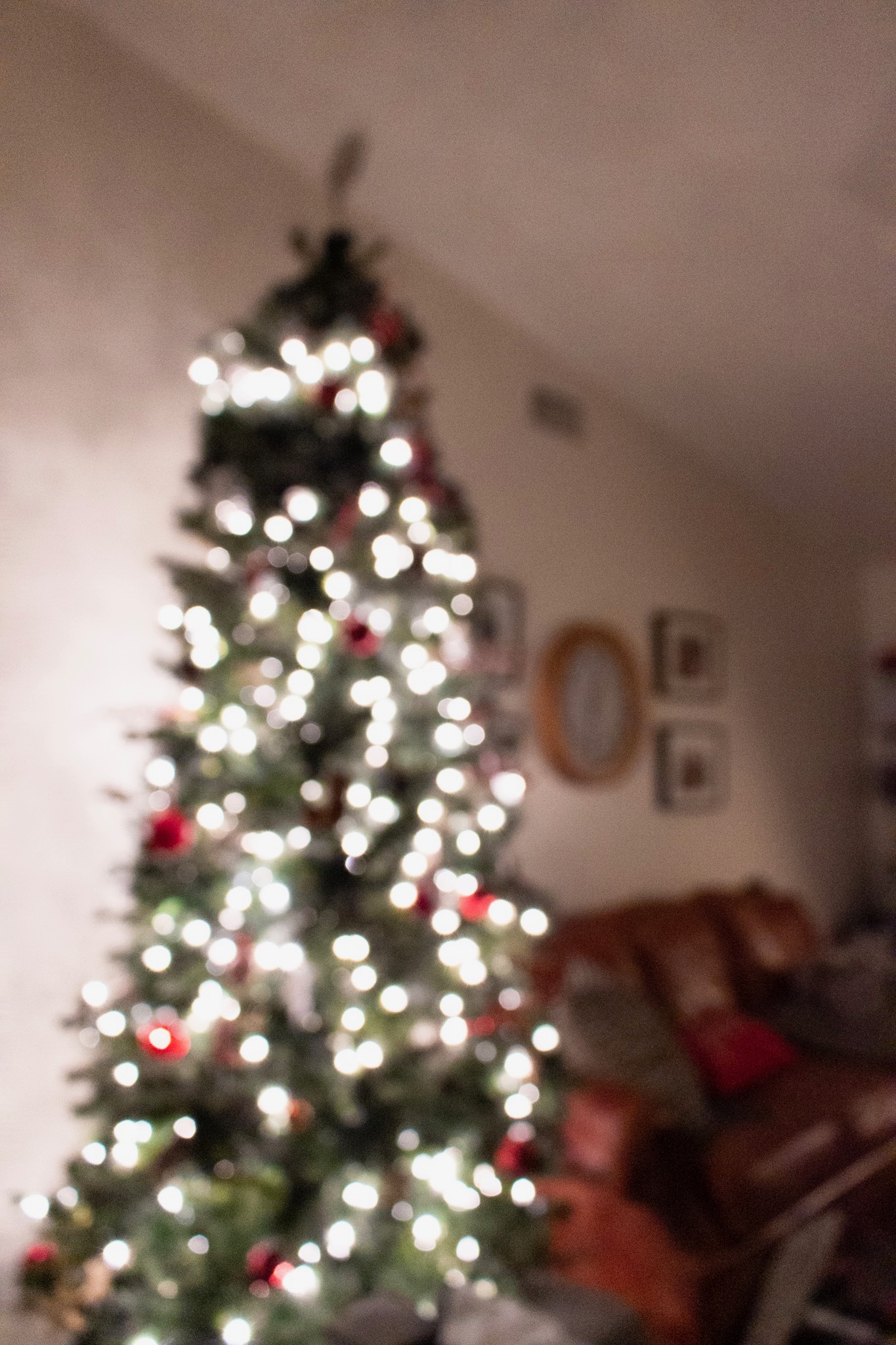 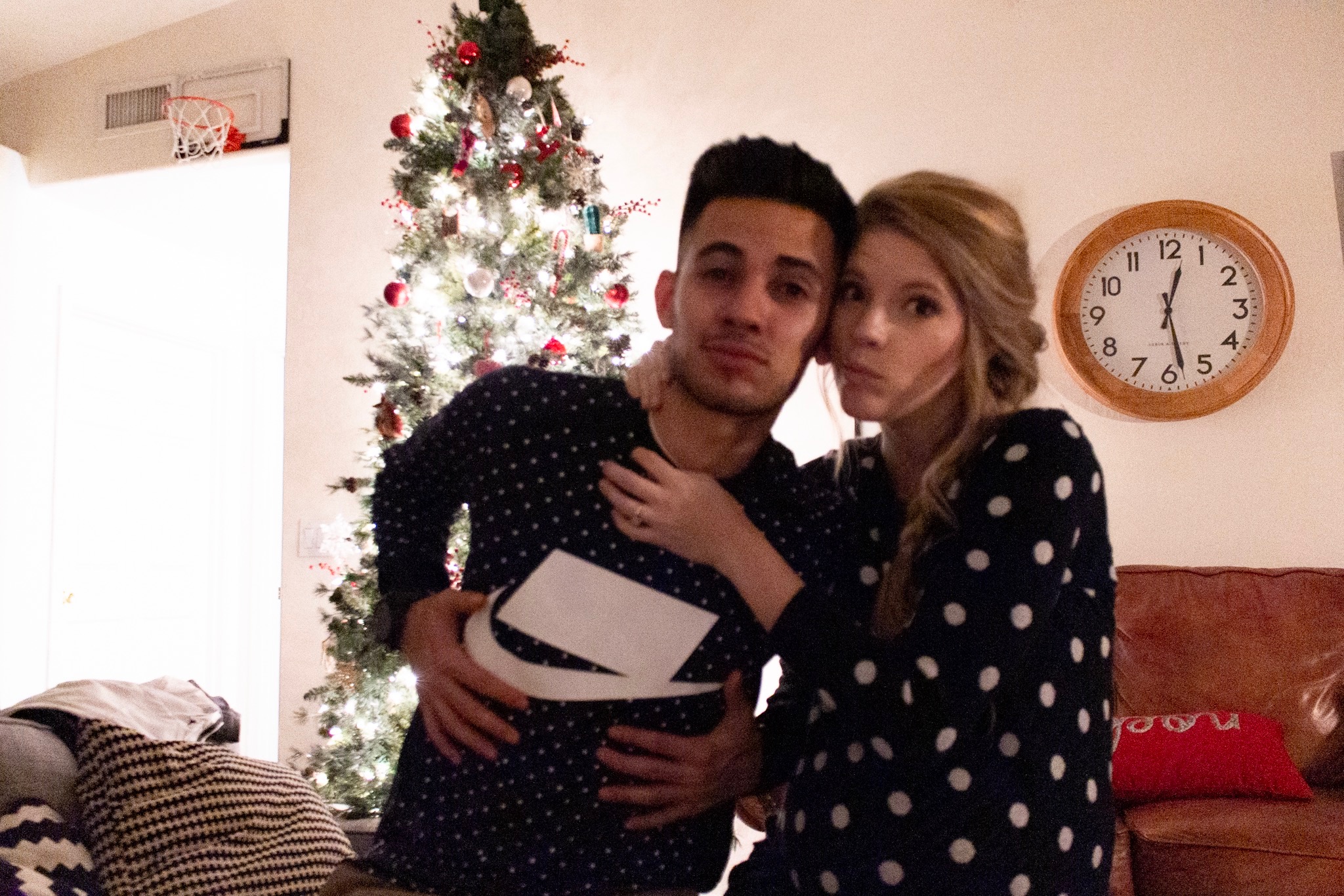 We had a nice chill morning at my parents. We had our usual cinnamon roll and oranges breakfast and exchanged gifts. It was such a nice change from the years where we were running back and forth between houses to Skype missionaries. Natalie and Mati were coming down in a few days for their wedding, so they stayed in Thatcher, but we were able to Facetime with them a bit! 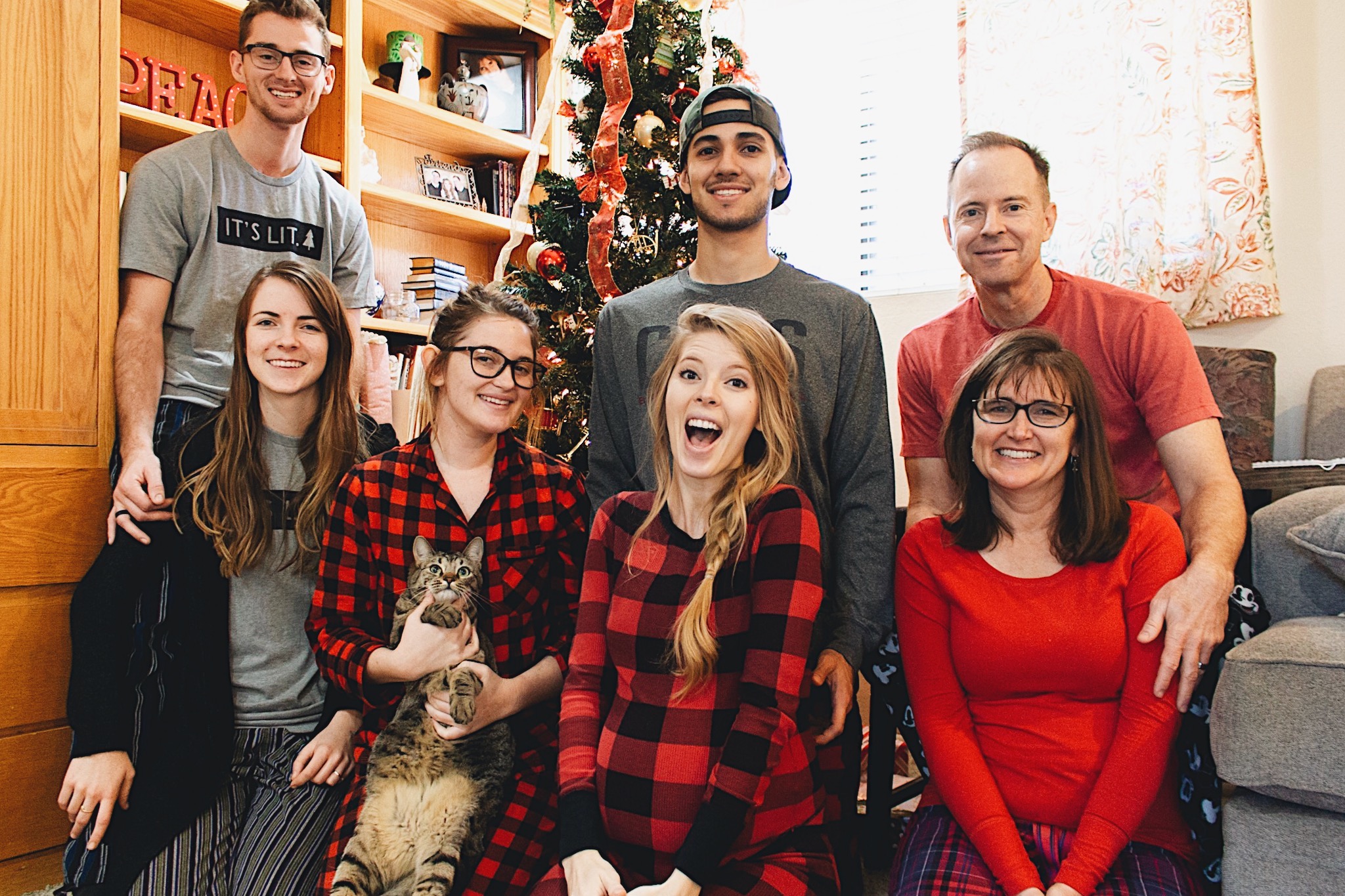 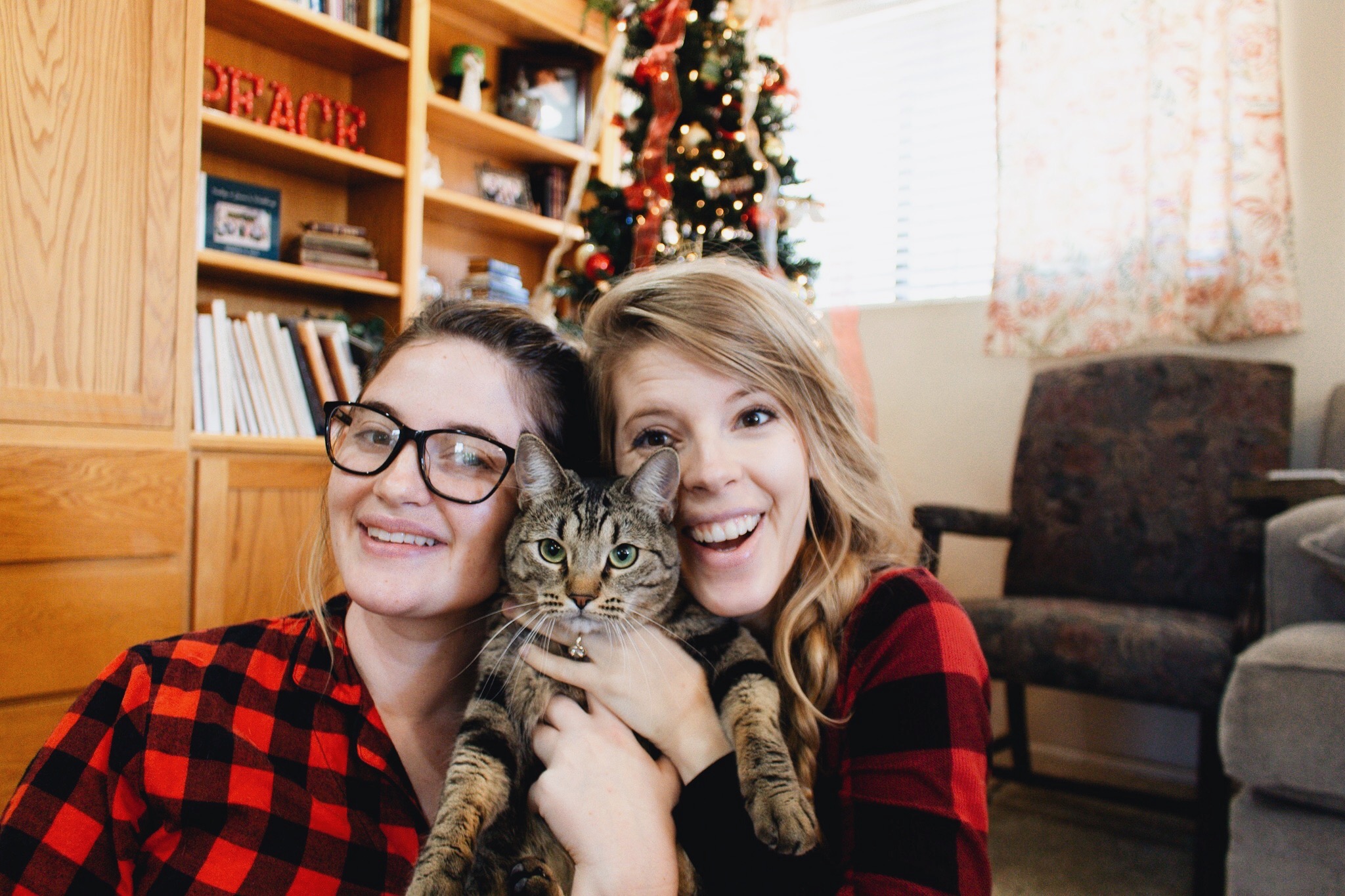 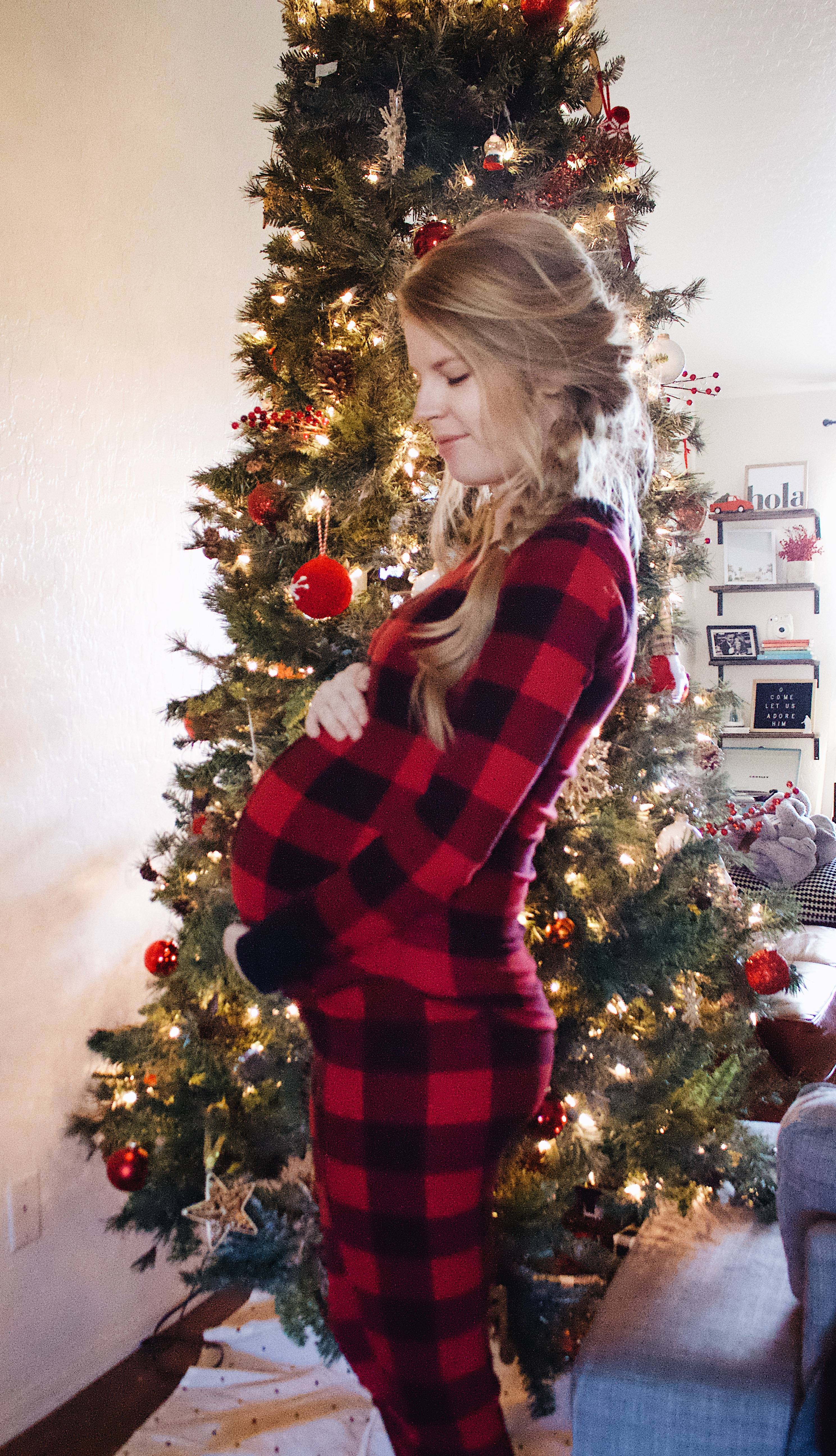 ^A festive little (not so much) baby bump.^ 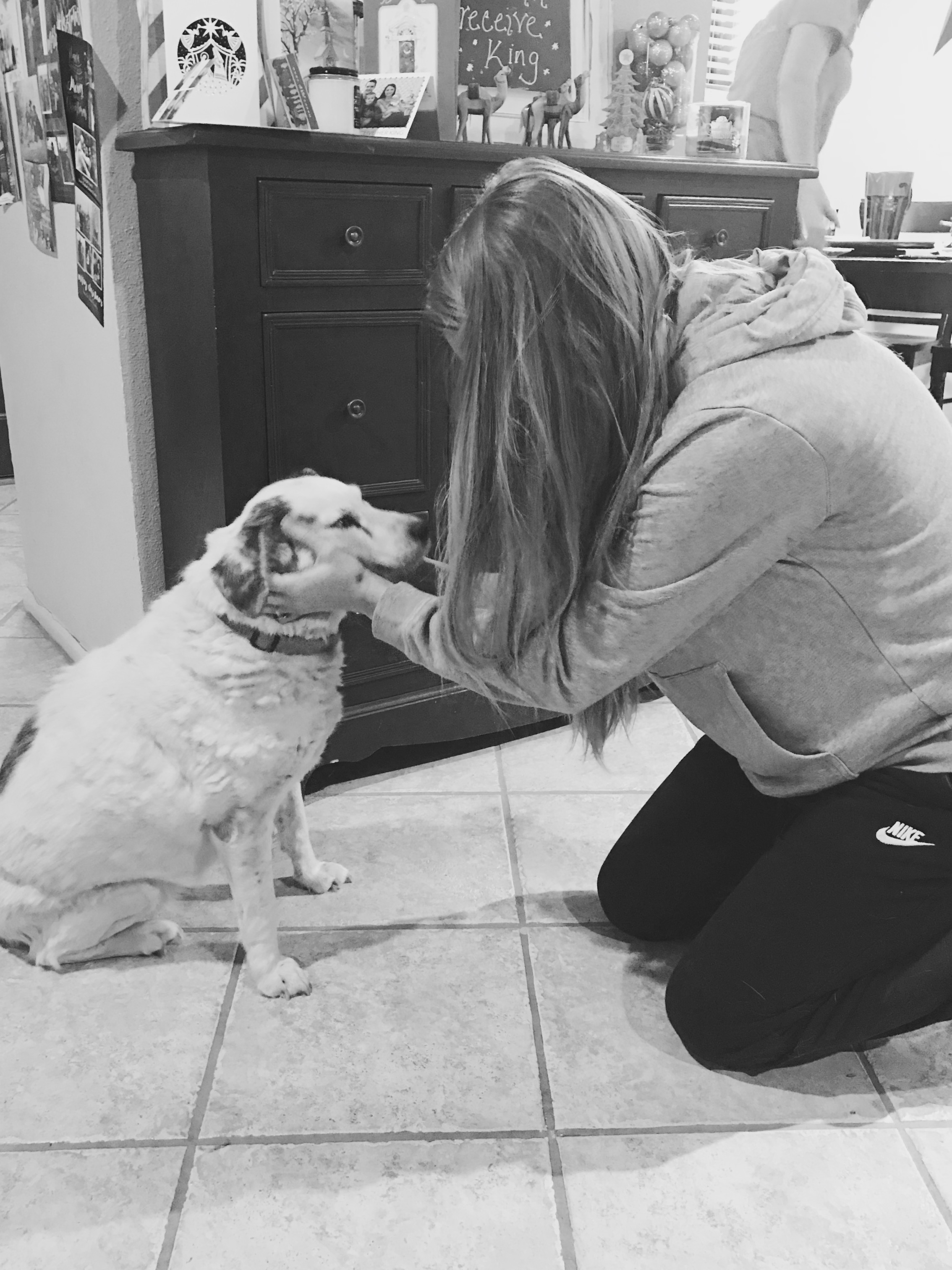 One of the not so fun things about December was saying goodbye to Roxy. We’d had her for almost 13 years and she was in really bad shape. After months of seizures and struggling to walk + eat, we decided it was best to put her down on New Year’s Eve day. It affected us all a little more than I think we expected. We all loved Roxy, but she just seemed like a part of our family that would always be there. Saying goodbye was oddly heartbreaking and I found myself getting choked up for days afterwards. She was a good dog, my very first dog. But I’m so glad she’s not suffering anymore and I know we’ll find her hair on our things still for years to come!

On New Year’s we got together and played some games at my parents and ate snacks. The best game we played was hide and go seek which was oddly some of the most fun we’ve ever had. 9 adults playing hide and go seek in the pitch black…it was just hilarious and the dedication of some people’s hiding spots were worth applauding. Just before midnight we headed to the bowling alley to meet up with Juan’s cousins. We ate some nachos from the snack bar (AKA Ron Swanson’s favorite restaurant) and I watched everyone bowl, seeing as I was carrying around my own bowling ball that would get in the way. We watched the Time Square count down and when the clock stuck midnight a random stranger came up and threw confetti all over me. It felt very festive, especially since I now had confetti all up in my water cup. And in true AZ New Year’s Eve fashion we drove home in the freezing cold rain. 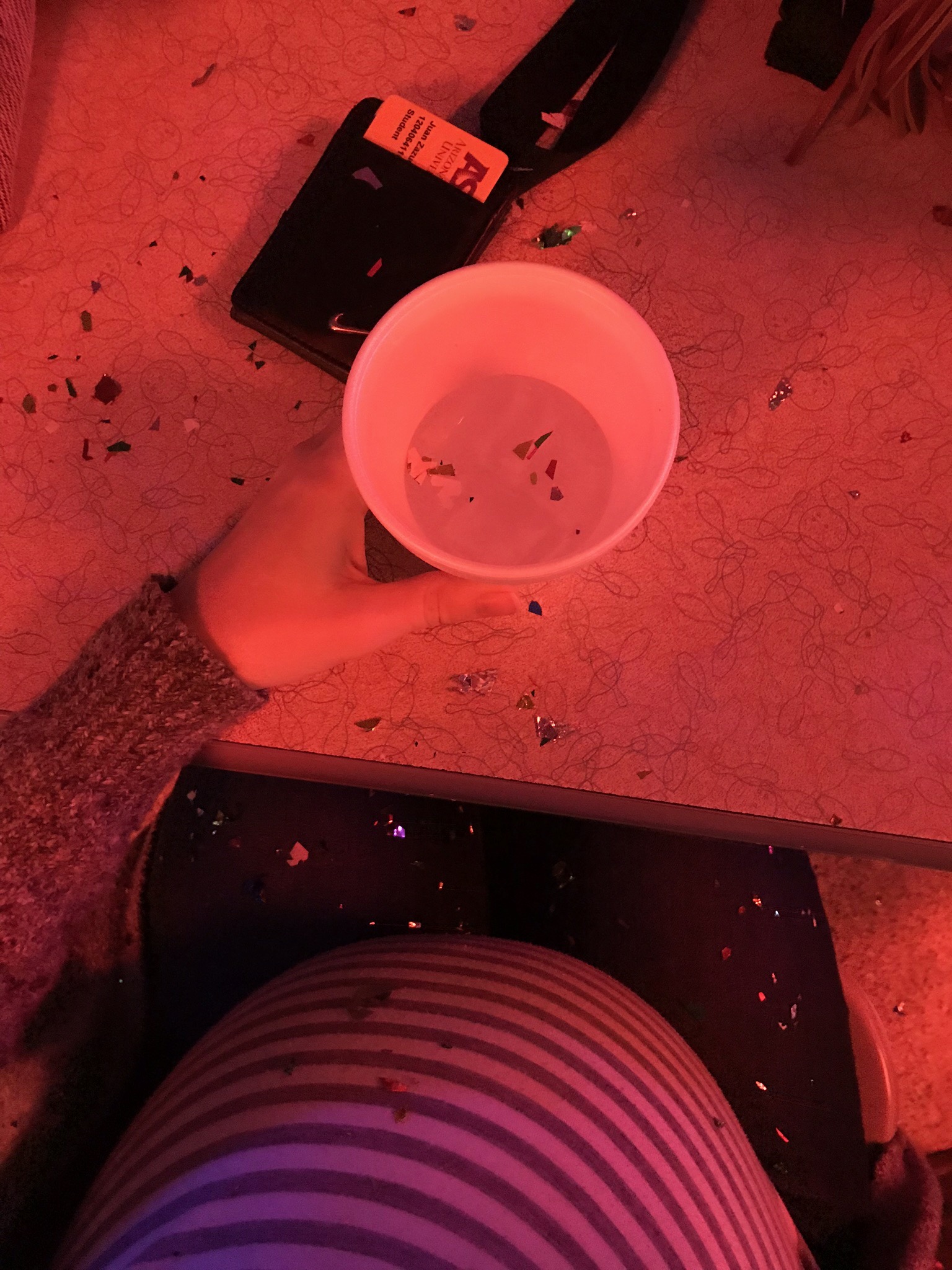